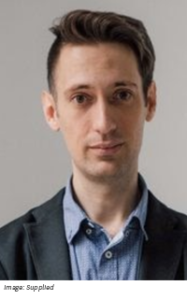 A political, science and immigration journalist, Chris Woods writes for Private Media’s publications Crikey and The Mandarin. Chris first entered journalism as a news archivist for AAP Pagemasters, before bouncing between everything from Long Island campus newspaper ‘The Statesman’, Brisbane startup blog ‘The Tech Street Journal’, Junkee, Pedestrian.TV, Saturday Paper and, finally, Crikey, first as a freelancer in 2017 and then as a full-time reporter in 2019. When Chris is not in state-sanctioned lockdown, Chris also volunteers for intersectional feminist radio program 3CR Tuesday Breakfast and is contactable via the Medianet Contacts database or via twitter @tophermwoods.

For me, a definite career highlight was Uberring out to a tiny hangar on the edge of Melbourne Airport at about 11pm on a Thursday for the story ‘Inside the last-minute push to save the Biloela family from deportation’. Watching a small grassroots attempt to stop the final dagger in that family’s back — a family that had already been through dawn raids, a full year in detention, and health consequences like rotted teeth from lack of sunlight — was like nothing I’d seen before.

How has Crikey been affected by the recent COVID pandemic?

The entire sector has taken a massive hit in advertising — and while our subscriber base means we’ve been luckier than some, we’ve definitely felt it — but it’s been heartening to see the company try their absolute best to find a way through with everyone’s job intact.

On the flip-side, with public communication being a deciding factor in whether countries turn out like South Korea or America, there’s also a genuine demand for quality journalism. Sincerely, I think the entire sector has stepped up — almost every publication has done a phenomenal job of cutting through a million, often conflicting updates.

Personally, for the last two weeks, this has all just meant staying up very late into the night scanning news feeds, science and geopolitical journals, and state, federal and international legislation — unpacking 10.30pm changes to what was, and was not, going to be legal the next day has been quite a ride.

Weirdly, before COVID-19, I’d ignore roughly 9 out of every 10 press releases; they could absolutely be useful for breaking news, acting as springboards for further investigations, or building contacts, but it was also just as likely I’d start a story from scratch or jump on questions coming from existing news stories.

Now, however, I’m across at least a third of every press release that comes through — the last fortnight has had has seen multiple new state or federal funds and laws announced every day, and that’s before you get on the business, science and community news — and doing those two newsletters has been a way to get as much of it as possible out there.

That journalism is something literally anyone can do, it just requires diligence, humility, and listening to do well. What we do is a privilege, and while it’s tempting to either get drunk on your ego or intimidated by the ground-breaking investigations — although Four Corners remains the gold standard, it should be said — some of the most important stories are the ones people are already dying to tell you. The least we can do is listen and put them out there.

What are some of the most important skills you’ve learnt from your career that your current job requires?

Other than sharing stories, being able to call out lies, false information, and hard and “soft” corruption — AKA the legal ties between political and business groups — is vital at a publication like Crikey.

Most of my job right now is writing daily newsletters and briefings — ‘The Worm’ at Crikey and ‘Coronavirus Government Global Briefing’ at The Mandarin — so being able to process a 24/7 global newscycle and then curate that into something different, succinct, and (hopefully) interesting has become vital.

Are stories easy or hard to find for your area of journalism and why?

Sadly, amidst the pandemic, it’s a matter of stories being far too easy to find. Doing the newsletters means scanning domestic and international media, as well as government, legal, community-run and social media sources — side-note, Twitter often means you will see news develop an hour or two before any of the major publications report on it — and right now the focus is basically curating the most important stuff and getting as much out there as possible.