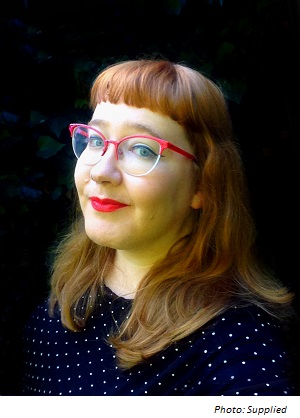 Mel Campbell is a Melbourne-based freelance journalist, author, novelist and critic. Mel is a columnist on writing at Overland literary journal, and a sessional university lecturer and writer-for-hire on film, television, literature and media. She tweets at @incrediblemelk and her personal website is The Look: reviews and essays about film, TV, clothes and history.

When did you decide journalism was something you wanted to pursue and why?
Pop-culture journalism is a really crowded field now, but it felt like a revelation to me back in 2003, when the editor of what’s now the Spectrum section of the Saturday Age wanted to publish a public lecture of mine about fashion and national identity as a cover feature. I’d trained as a copywriter, and then as a cultural studies academic, but what made me get into journalism was the realisation that mainstream media outlets were interested in the kind of writing I love to do: curious, deeply researched, analytical and fun.

If there has been one BIG lesson in getting to the stage you’re at now, what would that be?
Masthead loyalty is dead because mastheads are no longer loyal to us. Journalists are constantly being made redundant, editors and owners are changing much more quickly, and editorial budgets are being slashed. So individual journalists have to be our own mastheads now and go wherever we’re getting paid to do our best work. I always diversify my work so that the loss of any one gig doesn’t devastate my finances.

You’ve worked as a freelancer for the last few years. What are the biggest challenges for freelance journalists in Australia?
The outrageously depressed pay rates, and how long it takes to actually see the money, have also depressed the standard of work that’s commissioned and supplied. Fifteen years ago I’d easily earn more than $1000 for a newspaper feature – it was worthwhile spending time on it. Now I’m writing online opinion, essays and review articles for $100, $200 a pop. Lots of writers have shifted into more lucrative specialist trade press or write advertorial and ‘native’ content. There’s also been a ‘hobbyfication’ of freelance journalism – writers who can afford to pitch a few stories here and there because they have non-journalism day jobs. And a lot of what gets published is not original research, analysis and insight, but outrage-baiting reactions, listicles and wraps that can be assembled quickly.

What does a typical writing day look like for you?
As a film critic, I go to several media screenings a week at cinemas around Melbourne, and I’ll also stream TV screeners at home. I sub-edit and proofread four different magazines, and I do commercial copywriting, editing and proofreading, so I might be on-site at a client’s office, or at my desk at home. I might be writing a client’s website or email newsletter copy, editing a PhD thesis, or sub-editing a feature story about art or culture. My journalism and essay-writing take a lot of intensive research, drafting and structuring; I can’t simply ‘churn’ through it, and I usually end up working through the night. Last night I was up til 4am working on a TV review, then got up again at 8am to finish it.

What does a press release have to contain to be relevant to you?
Inverted pyramid stuff: who, what, when, where, how and why? I need to be able to figure out what makes this thing distinctive and special, and how I can incorporate it into my practice and pitch it to the editors I work with. I need to know the call-to-action – what does the publicist want from me? – and the timeline: when do I need to act on this release?