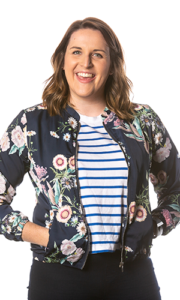 Jess Perkins is a Comedian, Podcaster and Radio Presenter from Melbourne. Her stand-up career started with the RAW Comedy Competition, where she was a National Finalist in 2015. Since then she’s performed stand up all over the country, and her podcast, Do Go On, has sold out two international tours. The Do Go On web series, a co-production with Stupid Old Studios, was nominated for an AACTA in 2020. She has been a regular guest on Triple j Drive with her popular segments including ‘Dog Acts’ and ‘Simply The Jess’t’. In 2021, she will take over the Weekend Arvos position on Triple j. You can Tweet her at @jess_perkins.

What made you pursue a career in radio?

I barely remember how it happened. That’s not to say I stumbled into radio, there was definitely a strong interest there, but I don’t remember making the decision to give it a go. I studied Journalism at uni and enjoyed the radio classes I did there. But my uni didn’t have proper studios or facilities to really get the radio experience, so I convinced a friend to train with me at SYN and do some graveyard shifts there. I loved it so much, and ended up going and doing a radio course at the Radio Training Institute, and volunteering at a few community stations.

My start at Triple J had nothing to do with the fact that I had radio experience. I was brought on as a comedian to do a weekly segment, and only later actually got to be a presenter myself.

How have your two professions as a comedian and radio personality affected one another?

They complement each other incredibly well. Comedy complements radio because it trains you to find the funny/interesting/weird in whatever story you might be talking about, and that helps find an interesting angle which lends itself to talk back. Radio keeps you on your toes and makes your brain work quickly, which can definitely make you a better comedy writer and performer. That’s not to say all comedians are great on radio, or all radio presenters are stand up comedians, but there’s definitely a Venn diagram with a strong overlap.

Tell us about the podcast you are a co-host of, ‘Do Go On’. How does it differ from your job at Triple j?

Do Go On is a comedy podcast that I’ve hosted with Matt Stewart and Dave Warneke since 2015. We take turns researching a topic and reporting it back to the others, who interrupt with tangents and jokes and questions. We’ve done serial killers, celebrity biographies, world events, you name it.

Again, I think the two jobs complement each other really well. I never know what’s going to happen on Do Go On, and that has really helped me trust myself on air, because I know I can respond quickly.

When we’re recording Do Go On, I’m not thinking so much about the listener. I’m in the moment and just focusing on having a conversation and a laugh with two of my best mates. I’ve always loved working with other people because I love to bounce off others. But in a lot of ways radio is the opposite. Because I’m alone in the studio, I only have myself to lean on, and I’m really focused on engaging with the listener and treating them as my co-host.

How would you differentiate yourself from other radio presenters?

I don’t think I would differentiate myself from others! I don’t want to tell myself there’s something incredibly special about me, because I think the appeal of a Triple J presenter is that they feel like your mate sitting with you in the car or at work, having a chat. That’s what I aim to be.

Although I will say that some of the best early feedback I got from a producer was “I don’t know what it is, but the audience really seem to follow you on dumb ideas” and I cherish that feedback

If I was listening to the radio and they were talking about this, would I be enthusiastic to listen? Is it important or relevant? What’s the point of this?