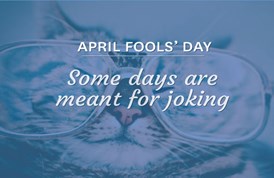 There is no denying the real attraction of April Fools’ Day as an excuse for dropping our masks of absolute seriousness and gravity in exchange for a licence to engage in a relatively unbridled splash of levity and humour.

As with many persistent and appreciated traditions, the continuance of April Fools’ Day in the public arena has a lot to do with it being kept in play within the media world – both by participating in the ‘jokes’, and in the sense of keeping a wary eye out against being suckered by an all-too convincing prank.

The thing about navigating a day like April Fools’ Day in terms of using it as a ‘publicity peg’ is that it has to be treated on similar lines to most forms of well-intentioned humour.

Someone’s bright idea of what makes them laugh might just be the equivalent of a ‘bad dad’ joke. Worse case, it may be an instance of seeing that one day of a special licence for light relief turn into an embarrassing pratfall. And April Fools’ Day is certainly littered with lots of both.

What’s well worth appreciating about April Fools’ Day is that it hasn’t (yet) been over-commercialised, and for those companies and organisations that venture on to the sometimes thin ice of an April Fools’ Day media release, they are taken in good spirit.

The art of the April Fools’ Day roundup is also alive and well, so what about this year’s crop, and what do they illustrate?

Did you, for instance, see the one from Australia’s WaterGroup offering a radically different incentive to fix water leaks: “One litre of beer for every litre of water saved – for today only!” Not a hard one to swallow many would say!

This was an example of a brew of both levity and some serious messages. It’s a calculated call that might not always work, but WaterGroup got their punchline in early and gave a link that wished everyone a Happy April Fools’ Day.

As with all judgements on entering the public arena, there are hits and misses and they vary from year to year.

One multi-national with a track record of hoaxes is Virgin, and their offering this year was a well airbrushed announcement about “the world’s first adult-free Kids Class aircraft cabin”, complete with a social media tie-in to their Facebook page.

This gets a pass mark from the get-go as appealing to the kid in all of us.
Putting our kids’ goggles on who wouldn’t want to experience kickable seats or a bubble-filled airline cabin or a hop-skotch skip down the aisle on your next trip?

Balance is the key. It’s a day where the effort is appreciated so long as the soft-sell is just that.

A side note of caution is that releases do come in for extra scrutiny, and timing, as always, is also key.

Some people may, for example, have taken a double take over a release on 31 March about a campaign promoting the premise that everyone in Australia should be in the running for a ‘Big Day Off’ work. Really? Yes, it was genuine.

We might wish it was more often but the bottom line is that April Fools’ Day comes around just once a year.

Whether you dive in or not, it’s an enjoyable reminder not to take our pursuits too seriously, and that it can be fun to play the court jester – just for one day.

Are you ready to spread the love and distribute your own press release? Check out our Press Release Distribution and sign up for free.