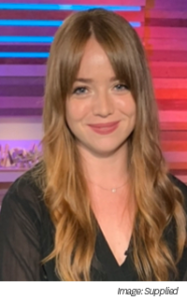 Ally Burnie is a reporter for media, marketing and advertising trade press title B&T. She has a passion for story-telling, both in a written and presenting capacity. After obtaining a BA (Journalism) and MA (Creative Writing), Ally initially delved into the world of copywriting – including running her own copywriting business – before landing a gig at B&T. As a reporter, presenter and podcast host of B&T’s Fast 30, Ally spends her days engaging with and telling the stories of the brightest and most creative minds in the media, marketing and advertising industries. Ally is contactable via our database or via her LinkedIn here.

Tell us a little about how you got to where you are today?
I’ve always been a writer. I think I wrote my first short story when I was five! Creative writing was always my main interest, but I also thought I’d get a lot out of a journalism degree in terms of learning how to tell people’s stories. So, I did a BA in Communications (Journalism) and then followed it up with an MA (Creative Writing). However, during my degree I found the journalism “hustle” wasn’t quite my thing, so I decided to go into copywriting instead. A few years later I wanted a change of pace – so re-routed back to my journo roots and ended up at B&T.

What story/project has been your favourite to work on so far this year?

My answer to this is actually a bit left field: B&T is owned by The Misfits Media, and this year I had the opportunity to work with The Misfits and The Central Coast Council in bringing the Central Coast to life as the host of Harvest Festival TV. Presenting/hosting has always been a passion/interest of mine and to get to live my (almost) Getaway dream was so much fun, and I hope brought some much-needed tourism to the region.

Press releases are really important in my day-to-day job. They are a great springboard into uncovering more interesting/bigger stories. Also working in trade press, releases are one of the best ways for me to get up-to-speed on who won a new account, who just released a new campaign, promotions/new hires etc. so that I can then inform the wider industry.

What aspects of journalism motivate you the most?

To me, journalism is about storytelling with purpose, and giving a voice to those who might not have otherwise had a platform to share their story. Although it goes without saying that holding truth to power is a vital aspect of journalism too, and there is a line between storytelling and telling the truth, which the age of social media has certainly blurred.

COVID-19 has impacted countless businesses and its people, and the media, marketing and advertising industry isn’t immune. I suppose my challenge is trying to look at the big picture and not just what’s happening right now. What will today’s news, numbers and figures mean in two, three or four months time? Finding a story is easy. Finding the story beneath the story requires a lot more work.