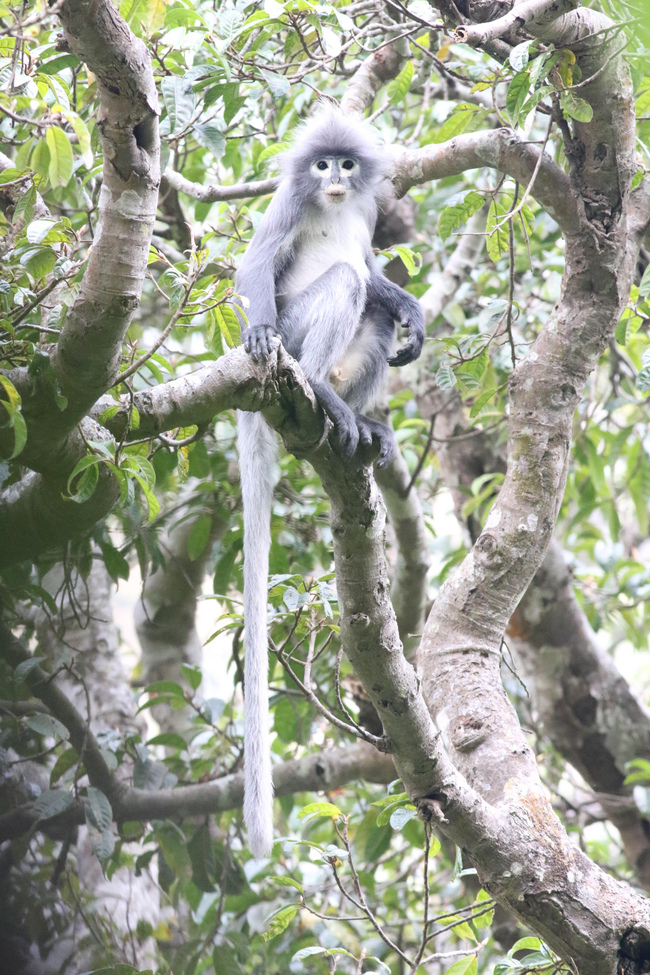 in Understanding and Conserving Biodiversity

11 November, 2020. Sydney: A new primate species named the Popa langur (Trachypithecus popa) has been discovered in Myanmar after years of extensive study and analysis of specimens from museums and field surveys completed by institutions around the world. This discovery highlights the importance of international collaboration, diverse scientific expertise and museum specimens in species discovery.

The Popa langur (Trachypithecus popa) is described in a new scientific paper released today in Zoological Research after an extensive genetic and morphological study, crucially including a 100-year old specimen stored at London’s Natural History Museum. These results were combined with data from specimens in other museums and field surveys carried out by the German Primate Center (DPZ) and Fauna & Flora International with partner organizations in Myanmar to confirm the existence of the new species.

“Identifying and naming a new species is always exciting, and research like this wouldn’t be possible without the work and collections behind the scenes in natural history museums. Using specimens, data and samples taken from museums, alongside new work in the field, we can map the distribution and the evolutionary history of species like the Popa langur to help us make plans to preserve this beautiful animal.

"The Australian Museum, the fifth oldest natural history museum in the world with a collection of 21.9 million objects and specimens, is proud to play a role in this international, collaborative team of researchers and institutions. Through this research over the past few years, we’ve worked across four continents to help better understand and conserve the amazing biodiversity of our planet,” Helgen added.

The Popa langur (Trachypithecus popa) occurs in central Myanmar and is named after the sacred Mount Popa, which holds the largest population of the species with just over 100 animals. Mount Popa is an extinct volcano, which features an important wildlife sanctuary, as well as a sacred pilgrimage site, home to Myanmar’s most venerated ‘Nat’ spirits.

Altogether there are only an estimated 200-250 animals of the new species, which live in four isolated populations in Central Myanmar. Throughout its range the langur is threatened by habitat loss and hunting, and therefore the research team has recommended that the new species be immediately classified as critically endangered.

Trachypithecus is a genus of langurs widely distributed in Asia with 20 known species. Despite numerous morphological and genetic studies, very little has been known about their evolutionary history.

The genus Trachypithecus is the most species-rich and widespread among the Asian colobine monkeys. Species occur mainly in Southeast Asia, from Bhutan, Assam (India) and Bangladesh in the west, over Myanmar, Thailand, Cambodia and Laos to Vietnam and South China in the east, but also in large parts of the Sundaland region (Malay Peninsula, Sumatra, Borneo, Java) and some smaller islands.

Researchers obtained samples and DNA of all 20 known species of Trachypithecus and gained a more detailed insight into the species diversity within this genus. Subsequent analyses of the data were able to enhance our understanding of the evolutionary history of this iconic group of primates.

Christian Roos, lead scientist with the German Primate Center said: “The DNA analysis of museum specimens collected for the Natural History Museum in London more than 100 years ago has finally led to the description of this new species, confirmed also by samples collected from the field by FFI’s research team.”

Ngwe Lwin, a primatologist with FFI's Myanmar program added: “Additional field surveys and protection measures are urgently required and will be conducted by FFI and others to save the langurs from extinction.”

The study Mitogenomic phylogeny of the Asian colobine genus Trachypithecus with special focus on Trachypithecus phayrei (Blyth, 1847) and description of a new species is published in the journal Zoological Research and accessible here.

Notes to editors: Images available to download here and here.

About the Australian Museum

The Australian Museum (AM) was founded in 1827 and is the nation’s first museum. It is internationally recognised as a natural science and culture institution focused on Australia and the Pacific. As custodian of more than 21.9 million objects and specimens, the AM is uniquely positioned to provide a greater understanding of the region through its scientific research, exhibitions and public and education programs. Through the Australian Museum Research Institute (AMRI), the AM also plays a leading role in conserving Australia’s biodiversity through understanding the environmental impacts of climate change, potential biosecurity threats and invasive species. To find out more, visit Australian.Museum.

About the Australian Museum Research Institute