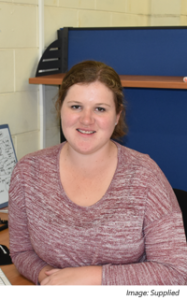 Morgan Burley grew up in a defence family and spent her childhood moving around Australia. When she was 17, she moved to South Australia to pursue journalism and creative writing degrees at the University of South Australia. Now 24, Morgan is the Editor of the Leader Group’s start-up newspaper The Highlands Leader, where she manages a team of journalists. In the future, she hopes to continue to grow, both professionally and individually, and explore more of the world. You can Tweet her at @MorganJBurley.

What made you want to be a journalist?
From an early age, I enjoyed the concept of seeking answers and doing whatever I needed to, to get those answers. Some may call it snooping, I call it the early stages of journalism. I loved to watch documentaries and was always fascinated with true stories that seemed unimaginable, like natural disasters, wars, or like so many others, crime. As a kid, I would read a lot, and once I became a teen, I began to write. After I received quite good marks in English, it was suggested I investigate journalism. As they say, the rest is history.

You’ve worked in both metro and regional outlets, what are the main differences in the way you work in each?

I’ve found that despite us all being human and belonging to a community, your audience is completely different if you’re working in metro, compared to rural or regional areas. In the country, you can expand your horizons and cover a huge array of topics, like court, local government, sports, tourism, health, and emergency services. If you’re working metro, a lot of the time you’re covering one round and that’s it. Because I have worked in rural areas, it has allowed me the unique skill of being able to read my interviewees and take that extra time to sit down with them over a coffee and talk. I’m a lot more community-minded in the country, whereas in the city it is very much “time is money”, i.e… you waste time, you waste money.

It’s been a turbulent year for regional newspapers, with some disappearing and others being launched. How has this affected you?

This year has certainly been tough for so many. We have seen more than 200 regional and rural newspapers permanently close, which has a devastating impact on local communities – something some are only just starting to realise. When the COVID-19 pandemic was hitting Australian shores, I was the editor of a small rural newspaper in the Riverland, South Australia. One month into the pandemic, the decision was made to pull the plug on the publication, and I was stood down. However, a few months later, I received a job offer for a start-up, independent publication in Central Queensland.

I have seen the highs and lows of the COVID-19’s impact on journalism, but it’s amazing to see businesses and communities start to build and grow again. Whether that be re-opening small businesses that were forced to close, or one that is starting from the ground up.

As editor of a regional newspaper, what do you look for in a story?

The first question I always ask myself when a story idea crosses my desk is “Why should the readers care?” That is always the base of any regional news story, or any story in general. Why should your readers/listeners/viewers care about what you’re producing? If the story idea can’t provide an answer, scrap it. Aside from the main question, which can make or break a story idea, I look for something gripping that tells me, “This is important”. Again, it always comes back to that first question, but if a story pulls your attention in and holds it there, whether it be about a GoFundMe page for a local family, or a rates increase from the local council, you know you’ve got something worthy of publication.

Press releases are vital for regional newspapers. Ideally, they provide the 5 W’s and the H to a story and allow for the journalists to take the information and mould it into a piece that is locally focused (sometimes!). For myself, they allow for more information and newsworthy topics to be shared across the industry as an easy way to provide the public with up-to-date information in a limited time frame. A small media release can come in handy to fill a space in the paper, and it can also alert me to stories and quotes as news breaks. Press releases are incredibly handy, when written well with the correct information.