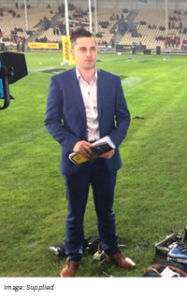 Matt Hall-Smith is a sports reporter for New Zealand’s flagship news broadcaster 1News, a division of the TVNZ network. He has worked as a sports reporter since 2017, covering major sports events for their 6pm bulletin. He Tweets at @MattHallSmith21.

How is the current situation with New Zealand’s lockdown impacting your day-to-day role?

It’s quite challenging working in the television business during the lockdown. Our job is to go out and film stories with people and tell their story which, unfortunately, is not something we can do during this isolation period. It’s made me think outside the norm and forced me to conduct a lot of online video calls and I’m finding myself being a lot more enterprising than usual, such as finding and sourcing technology online to help me do my job as I normally would. There’s a lot of things out of my control, such as internet connection and a good quality camera vision for the interviews. I have to make do with the bare minimum while also trying to make it good enough for national television. I’m still getting the job done, but I’m forced to work harder than usual just to get to the standard required.

What does a typical day look like for you?

The great thing about news is there’s never such a thing as a typical day. Every day is constantly changing, and things develop further as the day goes on as it gets closer to 6pm. I regularly attend the team rugby training and media sessions of 10-time Super Rugby Champions the Crusaders. Once I’ve done some interviews and filmed training vision with my cameraman, I’ll head back to the office, write a script and edit up a story for the night’s national news – often working right up until a few minutes before the story airs on TV.

Other days I’ve often pre-organised a story with a young up-and-coming local athlete in Christchurch and will go out and film a story. It could be anything from a young cyclist, to a team of inspiring kids to a story on chess.

What are the aspects of being a sports reporter that motivate you the most?

If you can be a good storyteller, then you’re doing a good job. I’m motivated by telling the audience something they don’t already know. Given the current climate with a lot of news online, I’m striving to inform people about something different. I’m always doing a diverse range of stories and trying to cover sports stories on all genders.

What are the most important skills that being a sports reporter requires?

Being good with people, asking meaningful questions and getting used to daily deadlines. With that said, it’s also important to get used to being conditioned to variable hours that come with this type of work, especially if it’s a good story or if you are working many days in a row across weekends. If you are good with people and can make smart decisions on your own, then that is beneficial. A bit of sports knowledge comes in handy too, along with developing relationships with contacts. Stories I’ve done with athletes years ago, I’m still in contact with them today and always talking about generating more stories with them.

Less is more. It should have the most important information at the top. Often I see some of the most vital information hidden, or left off completely. The shorter the better. Reporters and journalists get hundreds of emails a week and filtering through essay-like press releases isn’t that helpful. A good press release is one where you don’t have to make follow up calls about it as a result of simple information left off such as an embargo.