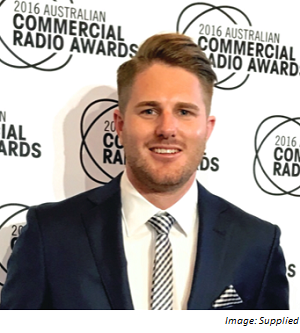 Bryce Ruthven is the morning announcer on TRFM Gippsland, part of the ACE Radio Network. Bryce is nearing 8 years in commercial radio after stepping away from the camera and a television career to pursue his soccer and radio career. Since then, Bryce has driven one of the biggest shows in the country in WSFM’s Jonesy and Amanda, along with a successful stint which included multiple ACRA nominations in Bundaberg at Hitz 939. In the past few years, he completed the AFTRS Program Directors course and when it comes to programming strategies, Bryce has one of the most creative minds in radio for someone who would still be considered relatively young in the industry. You can connect with Bryce on Instagram and Twitter via the handle @bryceruthven.

You recently started a new role, how are you enjoying it so far?
I worked at TRFM about 4 years ago so it’s nothing new to me working in Gippsland. I am loving the change of scenery, it has been great being able to set the alarm for 7am instead of 3:45am for a change. We have a great team at TRFM that’s hardworking and switched on when it comes to radio.

If there has been one lesson in getting to the stage you’re at now, what would that be?
One thing I’ve learnt is that people have multiple opinions in radio, some right and some wrong. What I’ve found has worked for me is to follow your personal opinion and work with people who have a positive outlook on radio and life in general.

For a press release to stand out to you, what does it need?
Something that is short, sweet and straight to the point so to speak. There is nothing worse than being sent something that takes an hour to read, I personally like the quick facts. I’m more likely to read something that has a catchy headline or title, something that you see has a bit of creativity behind it!

When did you decide you wanted to work in the radio industry?
I loved listening to the Hot 30 Countdown every night growing up as a kid. While I was working in TV I met a few people that had crossed over to radio and they recommended it. Then when I moved to Queensland to play soccer, I was involved in TV and radio interviews and always thought the radio side of things looked like a stack of fun. There was one interview that I’ll always remember as a 20 year old, that’s pretty much when I thought I wanted to be a radio announcer.

What are the keys to being a good presenter on air?
I think it’s important to know your market and target audience, it’s also great to get out in the community and build your own brand. With radio particularly, I’d always recommend having the mindset that being on air or having a role in radio isn’t a given right, it’s a privilege and treat each day or on-air shift like that, otherwise you won’t do yourself any favours in building a successful career.

Meet Emily Angwin, a Quill Award Winner for Best Breaking News Coverage in 2015 for her coverage with Jacqui Felgate of the Wyndham Vale lake tragedy. In addition to her role at Seven, she is also a fill-in weather presenter.

Meet Eden Cox, a writer and an amateur archaeologist. She has been a magazine editor at Executive Media since 2010, and has worked on a wide range of publications for diverse niche markets.