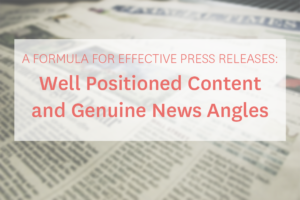 There is an almost universal formula that your press releases should say what they need to say, and tell the stories they are setting out to tell, in the space of just one page.

On average this will give you around 600 words to play with – about the length of this article.

Tip one: Starting as you mean to continue

The opening paragraph – or the ‘intro’ – is typically the make or break of any media release.

This one sentence carries as much weight as the headline to hook a journalist and keep them reading more. This is where they begin to envisage the release’s story potential for the audiences they reach.

Like the headline, the final crafting of a compelling opening to your release may in fact, and probably should, undergo several revisions. When you get to the final version and read it out loud it genuinely might sound like the beginning of a news bulletin.

Tip two: The content is the information, the angle is the news value

One way of looking at the choices you make about what to put in and leave out of a release is to ensure you balance the information being communicated.

A good way to start is to get the content or base information right. This might involve listing out key questions and answers you would anticipate will result from ‘going public’ with your release.

In almost every instance those questions aren’t complicated and a good guide is this excerpt from a very old Rudyard Kipling verse that was used by journalism educators for decades:

I keep six honest serving-men
(They taught me all I knew);
Their names are What and Why and When
And How and Where and Who.

Sourcing and ordering information that will answer these basic questions makes a release ‘fit for purpose’, which is good but it’s not enough without also identifying what the news angle is.

The most notorious mistake with releases is that the news angle (or angles) become too hard to find quickly.

Commonly the news angle is left buried too far down the release when it needs to be nearer to the top and sustained as much as possible throughout the release.

One way to address this is to assign someone to take the position of ‘the journalist or editor’ and to read the release from that point of view.

Give that person the release and get them to identify what they would take away from it. What is the part of the release that really catches their eye or that they could imagine has a newsworthy ‘X factor’.

Tip three: Never underestimate the worth of a quotable quote

Quotes that are clearly attributed, well positioned and used sparingly are a powerful element to position within in any release.

The knack to framing good quotes – outside of necessarily formal official statements – is again to read them out loud. That allows you to judge how naturally they come across and how well they avoid sounding too artificial or too corporate.

The best releases seen by our media team at Medianet are ones that contain a quote from a leading spokesperson that ‘says it like it is’.

In those releases, the quotes are placed near the top of the release and not hidden away at the bottom. They work with the basic information but bring it to life and help journalists envisage the relevance and importance of what’s being said.

And there’s not much more you can ask of an effective release.

Sign up free and have your event sent to over 12,000 journalists and editorial inboxes across Australia with AAP’s Editorial Diary.