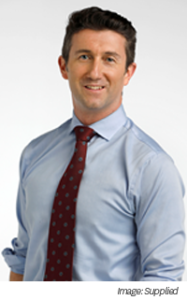 Adam Creighton is an acclaimed journalist who is currently the economics editor at The Australian and will start his new role this Sunday, 5 July as the co-host on Sky News Australia’s Business Weekend alongside Ticky Fullerton. Graduating from the University of New South Wales with a Bachelor of Economics (First Class Honours), Adam started his career at the Reserve Bank of Australia and the Australian Prudential Regulation Authority.
He later studied at Balliol College, University of Oxford earning a Master of Philosophy in Economics as a Commonwealth Scholar, leading to a Marjorie Dean internship at The Economist in London. He joined The Australian in 2012 as economics correspondent, and became economics editor in 2018.
With a special interest in tax and financial policy, his writing has been featured in The Economist and The Wall Street Journal (Washington DC), and has authored chapters on superannuation in Oxford University Press. He was most recently a Journalist in Residence at the University of Chicago’s Booth School of Business in 2019. Adam is contactable via the Medianet database or tweet him @Adam_Creighton.

I came to journalism relatively late, having worked as an economist after uni. I wrote some op-eds while a grad student at Oxford and I got a taste for opinion journalism. My first taste of news journalism was at The Economist in 2009 in London, where I worked on the finance and books sections for about 6 months as a Marjorie Deane intern. After that I worked in politics and at a think tank for a couple of years, but when a spot came up at The Australian in 2011 I jumped at the opportunity. It was certainly the right decision looking back. I feel fortunate to have found a job that I both enjoy and fits my personality and skills.

What story has been your favourite story to work on so far this year?

Covering the economic implications of the coronavirus pandemic has been fascinating, enjoyable, although sometimes stressful. I wrote a series of columns over April and May, which argued the lockdown measures did more harm than good and the coronavirus wasn’t as deadly as we all feared back in March. Through these measures and the hysteria they have caused we might have created the biggest economic disaster in a century, which could seriously impair the job prospects of a generation of young people. I have been very disappointed by the media’s behaviour throughout the crisis. The reporting of deaths and cases has almost totally ignored the fact that many people die, especially very old people, all of the time for a variety of reasons and we don’t shut down our society for months.

What are you most looking forward to ahead of joining Sky News Business Weekend?

New shirts and ties! More seriously, live television is fun; I had the opportunity to host a business channel for two hours a day in late 2018 and early 2019, so I’m not totally new to it. The chance to interview a leading business or political figure each week will enrich my journalism and improve my contact base. It’s also a real treat to be working with someone as experienced as my co-host Ticky Fullerton!

Economics journalists are typically busy because of the relentless deluge of data and reports. Right now, amid the biggest economic crisis of a generation, that’s even more true. The challenge of daily economic journalism is sitting back and trying to assess the big picture.

I rarely write stories from press releases alone, but I still appreciate receiving them because they can provide useful contacts. I actually tend to look more at Medianet press releases, because I know there’s been some quality control and they’ve been tailored to what I’m interested in. It still amazes me I get press releases from random PRs on topics I would never dream of writing about.

How has the pandemic changed your day-to-day schedule?

It’s made me realise it’s possible to work entirely from home, although I do miss the human interaction of the newsroom. If there’s any positive legacy of the pandemic perhaps it will be increased flexibility in work arrangements for those lucky enough to still have jobs. Journalists have never been so well-read and there’s never been so much interest in news, but sadly the pressure on the media financially has been intense.