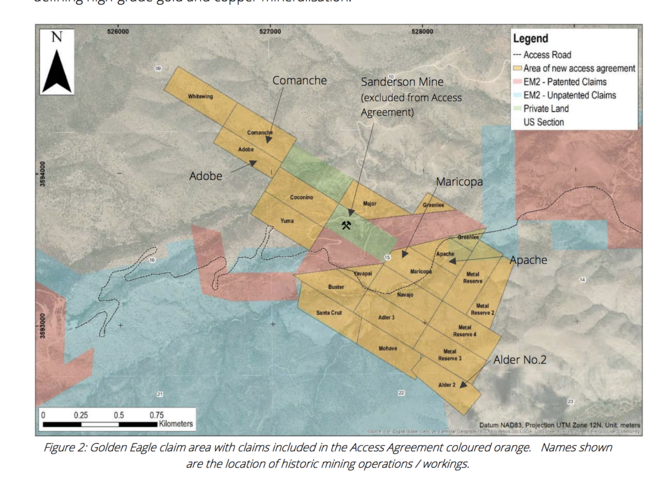 Eagle Mountain Mining Limited (ASX:EM2) (“Eagle Mountain” or the “Company”) is pleased to announce that Wedgetail Operations LLC (“Wedgetail”) owner of the Oracle Ridge Copper Project (80% owned by Eagle Mountain) has secured access to an area the Company has labelled “Golden Eagle” which includes multiple historic gold-copper mines along a north west to south east trend. The area is less than three kilometres from the Oracle Ridge mine. In addition to obtaining access to “Golden Eagle”, Wedgetail has also secured access to all Pima County patented claims that fall within the OREX unpatented claim area.

Access to both these prospective claims, which are held by the local Pima County, will facilitate initial exploration. The claims included in the access agreement are classified as “patented” which cover both surface and mineral rights and generally require fewer permits for both exploration drilling and mining operations. Figure 1 shows the location of these areas in relation to existing claims held by Wedgetail.