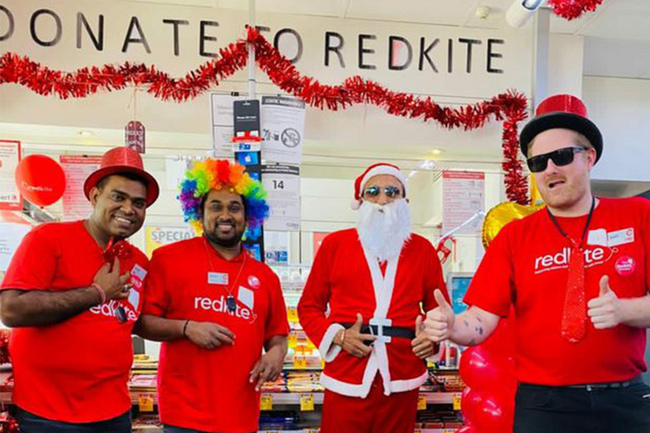 Demonstrating the immense generosity of Australians in times of crisis, Coles Group raised a record $3.2 million in the lead up to Christmas to help feed vulnerable Australians and support families affected by childhood cancer – more than 2.6 times the amount raised in its 2019 Christmas fundraising campaign[1].

More than half the funds raised were from Coles supermarket customers who purchased a $2 donation card at the check-out to support food rescue organisation, SecondBite and national children’s cancer charity, Redkite. The sales of donation cards at Coles supermarkets increased to more than $1.6 million, up from around $778,000 in the previous year.[2]

Some of the most generous supermarket customers in each state shop at Broadway (NSW), Donvale (VIC), Firle (SA), Palmerston (NT), Mowbray (TAS), Carindale (QLD), Midland (WA) and Gungahlin (ACT) which topped the list for the most donations in the country.

Coles Liquor also achieved record fundraising efforts at its Liquorland, Vintage Cellars and First Choice Liquor stores, raising a total of over $720,000 for SecondBite, up almost 25% on Christmas 2019. First Choice Liquor in Falcon (WA), Maroochydore (QLD) and Morayfield (QLD) and Liquorland in Yarraville (VIC) were the highest fundraising liquor stores in the nation.

Coles Express customers donated more than $425,000 for Redkite, six times the amount raised in the previous year’s campaign, with customers rounding up their purchase to the nearest dollar or buying select Coles Express products for which Coles donated a portion of the sale proceeds.

In addition to donations by customers and team members, for the first time Coles Group donated $200,000 worth of gift cards to nearly 2,000 families affected by childhood cancer to help make their festive season brighter.

The record fundraising efforts will provide much-needed support for SecondBite and Redkite, both of which faced increased demand for their services during the holiday season due to the impact of COVID-19.

esearch released by SecondBite in November showed more than three-quarters of its food charities[3] expected Christmas would be more difficult for people they support in the community, with 72 per cent of agencies also reporting an increase in demand for food relief since COVID-19 began.

Redkite revealed in December 2020 that nearly a quarter of families they surveyed who have a child diagnosed with cancer, feared they couldn’t afford basics like food, with nearly a third of respondents also saying they didn’t think they could continue to provide for their families[4].

SecondBite CEO Jim Mullan said that the $1.57 million raised for SecondBite by Coles in the lead up to Christmas will help provide the equivalent of 7.8 million meals to people in need.

“2020 was an incredibly difficult year for families across the country and SecondBite could not have responded in the way we have without the support of the entire Coles team. 2021 will come with a range of legacy challenges from COVID and bushfires and their collective impact on both the economy and communities across the country,” he said.

“The funds raised by the Coles team will allow us to deliver greater positive impact through the increased distribution of fresh and nutritious food to individuals, families and communities in need throughout Australia.”

Redkite CEO Monique Keighery said the funds of almost $1.5 million raised for Redkite, in addition to $200,000 in gift cards donated by Coles Group, will go a long way to easing the pressure on families impacted by childhood cancer.

“Across Australia, demand for our counselling and support services went up by a massive 30 per cent as families grappled with the daunting task of keeping their immunocompromised child safe during the pandemic, along with the daily struggle of paying for groceries, household bills and hospital trips,” she said.

“For families who have a child with cancer, 2020 was a devastating year but thanks to the incredibly generous support of Coles customers, Redkite will be able to stay on the frontlines to deliver the practical, emotional and financial support these families so desperately need.”

Coles Group Chief Executive Officer Steven Cain said the Christmas Appeal shows just how important it is to support the community at such a challenging time for so many doing it tough.

“I would like to thank our customers who have generously donated during what was a very tough year with bushfires, floods, drought and COVID-19. I’m always amazed by the spirit of the community and our customers can be assured they are making a genuine difference to those who need it most,” he said.

“I am thrilled with the way our team members came together for this Christmas Appeal, whether that be in supermarkets, liquor stores or Coles Express convenience stores. Their commitment to winning together with our community has truly inspired customers to support the important work of SecondBite to feed Australians in need and Redkite’s invaluable help for families dealing with childhood cancer.”

In addition to raising funds for SecondBite through the Christmas appeal, more than 765 Coles supermarkets donate surplus fresh food to SecondBite to distribute to around 1,100 community food programs across Australia.

Since 2011, Coles has helped donate enough surplus fresh food to SecondBite to provide the equivalent of 128 million meals to disadvantaged Australians. During COVID-19, Coles has also donated grocery essentials to the retail value of $7.9 million to SecondBite and Foodbank to distribute to vulnerable Australians.

[3] The SecondBite survey was undertaken from October to November 2020 and involved 214 community agencies which provide food relief to vulnerable people such as those who are experiencing homelessness unemployed, elderly and single parent families.

[4] Redkite COVID-19 Social Impact Assessment Survey was conducted between May and August 2020 involving 369 Redkite families. The findings released in December specifically relate to responses from 83 Redkite families in August.