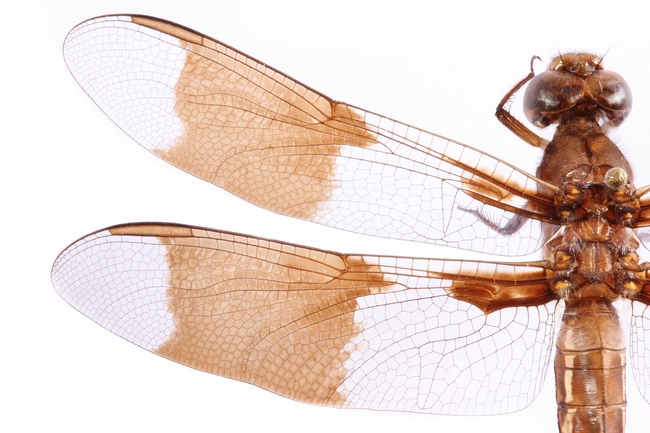 Scientists have revealed how nanomaterials inspired by insect wings are able to destroy bacteria on contact.
The wings of cicadas and dragonflies are natural bacteria killers, a phenomenon that has spurred researchers searching for ways to defeat drug-resistant superbugs.
New anti-bacterial surfaces are being developed, featuring different nanopatterns that mimic the deadly action of insect wings, but scientists are only beginning to unravel the mysteries of how they work.
In a review published in Nature Reviews Microbiology, researchers have detailed exactly how these patterns destroy bacteria - stretching, slicing or tearing them apart.
WATCH AND EMBED THE VIDEO
Lead author, RMIT University’s Distinguished Professor Elena Ivanova, said finding non-chemical ways of killing bacteria was critical, with more than 700,000 people dying each year due to drug-resistant bacterial infection.
“Bacterial resistance to antibiotics is one of the greatest threats to global health and routine treatment of infection is becoming increasingly difficult,” Ivanova said.
“When we look to nature for ideas, we find insects have evolved highly effective anti-bacterial systems.
“If we can understand exactly how insect-inspired nanopatterns kill bacteria, we can be more precise in engineering these shapes to improve their effectiveness against infections.
“Our ultimate goal is to develop low-cost and scaleable anti-bacterial surfaces for use in implants and in hospitals, to deliver powerful new weapons in the fight against deadly superbugs.”

The wings of cicadas and dragonflies are covered in tiny nanopillars, which were the first nanopatterns developed by scientists aiming to imitate their bactericidal effects.
Since then, they’ve also precisely engineered other nanoshapes like sheets and wires, all designed to physically damage bacteria cells.
Bacteria that land on these nanostructures find themselves pulled, stretched or sliced apart, rupturing the bacterial cell membrane and eventually killing them.
The new review for the first time categorises the different ways these surface nanopatterns deliver the necessary mechanical forces to burst the cell membrane.
“Our synthetic biomimetic nanostructures vary substantially in their anti-bacterial performance and it’s not always clear why,” Ivanova said.
“We have also struggled to work out the optimal shape and dimensions of a particular nanopattern, to maximise its lethal power.
“While the synthetic surfaces we’ve been developing take nature to the next level, even looking at dragonflies, for example, we see that different species have wings that are better at killing some bacteria than others.
“When we examine the wings at the nanoscale, we see differences in the density, height and diameter of the nanopillars that cover the surfaces of these wings, so we know that getting the nanostructures right is key.”
Ivanova said producing nanostructured surfaces in large volumes cost-effectively, so they could be used in medical or industrial applications, remained a challenge.
But recent advancements in nanofabrication technologies have shown promise for opening a new era of biomedical antimicrobial nanotechnology, she said.
A pioneer in biomimetic antibacterial surfaces, Distinguished Professor Elena Ivanova leads the Mechano-bactericidal Surfaces research group in the School of Science at RMIT.
Her research is supported with funding from the Australian Research Council Industrial Transformation Research Hubs and Industrial Transformation Training Centre schemes, and the CASS Foundation.
‘Mechano-bactericidal actions of nanostructured surfaces’, with RMIT co-authors Dr Denver Linklater and Professor Russell Crawford as well as co-authors from the Universitat Rovira I Virgili, The Ohio State University, University of Southampton and Swinburne University of Technology is published in Nature Review Microbiology (DOI: 10.1038/s41579-020-0414-z).
- ENDS
Image Captions
Dragonfly
Common whitetail dragonfly. Public domain image by Christopher Johnson (Insects Unlocked, University of Texas at Austin)
Cicada
Annual cicada. Public domain image by Alejandro Santillana (Insects Unlocked, University of Texas at Austin)
dragonfly-wing-surface
The nanopillars on the surface of a dragonfly wing (magnified 20,000 times). Image: RMIT University
bacteria-silicon-nanoneedles
Golden staph bacteria being ruptured and destroyed by black silicon nanoneedles, an anti-bacterial surface inspired by insect wings (image magnified 30,000 times). Image: RMIT University
Media enquiries: Gosia Kaszubska, +61 417 510 735 or gosia.kaszubska@rmit.edu.au.