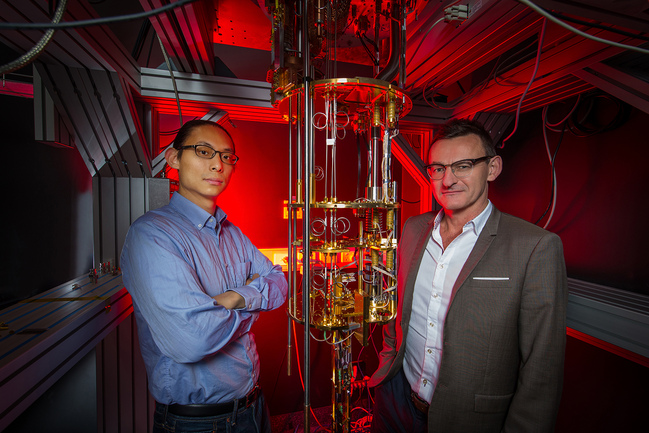 for interviews. More below and full media kit with photos, video, backgrounder etc at www.scienceinpublic.com.au

Most quantum computers being developed around the world will only work at fractions of a degree above absolute zero. That requires multi-million-dollar refrigeration and as soon as you plug them into conventional electronic circuits they’ll instantly overheat.

But now researchers led by Professor Andrew Dzurak at UNSW Sydney have addressed this problem.

The researchers’ proof-of-concept quantum processor unit cell, on a silicon chip, works at 1.5 Kelvin – 15 times warmer than the main competing chip-based technology being developed by Google, IBM, and others, which uses superconducting qubits.

“This is still very cold, but is a temperature that can be achieved using just a few thousand dollars’ worth of refrigeration, rather than the millions of dollars needed to cool chips to 0.1 Kelvin,” explains Dzurak.

“While difficult to appreciate using our everyday concepts of temperature, this increase is extreme in the quantum world.”

Quantum computers are expected to outperform conventional ones for a range of important problems, from precision drug-making to search algorithms. Designing one that can be manufactured and operated in a real-world setting, however, represents a major technical challenge.

The UNSW researchers believe that they have overcome one of the hardest obstacles standing in the way of quantum computers becoming a reality.

In a paper published in the journal Nature today, Dzurak’s team, together with collaborators in Canada, Finland and Japan, report a proof-of-concept quantum processor unit cell that, unlike most designs being explored worldwide, doesn’t need to operate at temperatures below one-tenth of one Kelvin.

Dzurak’s team first announced their experimental results via the academic pre-print archive in February last year. Then, in October 2019, a group in the Netherlands led by a former post-doctoral researcher in Dzurak’s group, Menno Veldhorst, announced a similar result using the same silicon technology developed at UNSW in 2014. The confirmation of this ‘hot qubit’ behaviour by two groups on opposite sides of the world has led to the two papers being published ‘back-to-back’ in the same issue of Nature today.

Qubit pairs are the fundamental units of quantum computing. Like its classical computing analogue – the bit – each qubit characterises two states, a 0 or a 1, to create a binary code. Unlike a bit, however, it can manifest both states simultaneously, in what is known as a “superposition”.

The unit cell developed by Dzurak’s team comprises two qubits confined in a pair of quantum dots embedded in silicon. The result, scaled up, can be manufactured using existing silicon chip factories, and would operate without the need for multi-million-dollar cooling. It would also be easier to integrate with conventional silicon chips, which will be needed to control the quantum processor.

A quantum computer that is able to perform the complex calculations needed to design new medicines, for example, will require millions of qubit pairs, and is generally accepted to be at least a decade away. This need for millions of qubits presents a big challenge for designers.

“Every qubit pair added to the system increases the total heat generated,” explains Dzurak, “and added heat leads to errors. That’s primarily why current designs need to be kept so close to absolute zero.”

The prospect of maintaining quantum computers with enough qubits to be useful at temperatures much colder than deep space is daunting, expensive and pushes refrigeration technology to the limit.

The UNSW team, however, have created an elegant solution to the problem, by initialising and “reading” the qubit pairs using electrons tunnelling between the two quantum dots.

The proof-of-principle experiments were performed by Dr Henry Yang from the UNSW team, who Dzurak describes as a “brilliant experimentalist”.

Other authors on the paper include Ross Leon, Jason Hwang (now at the University of Sydney), Andre Saraiva, Tuomo Tanttu, Wister Huang, Kok-Wai Chan and Fay Hudson, all from Professor Dzurak’s group, as well as long-time collaborators Dr Arne Laucht and Professor Andrea Morello from UNSW.

Dr Kuan-Yen from Aalto University in Finland assisted the device fabrication team, while Professor Kohei Itoh from Keio University in Japan provided enriched silicon-28 wafers from which the devices were made. The qubit devices incorporated nano-scale magnets to help enable qubit operation, and these were designed with support from a team led by Professor Michel Pioro-Ladrière at Université de Sherbrooke in Canada, including his PhD student Julien Camirand Lemyre.