Slow internet? How COVID-19 is stressing online infrastructure in your country 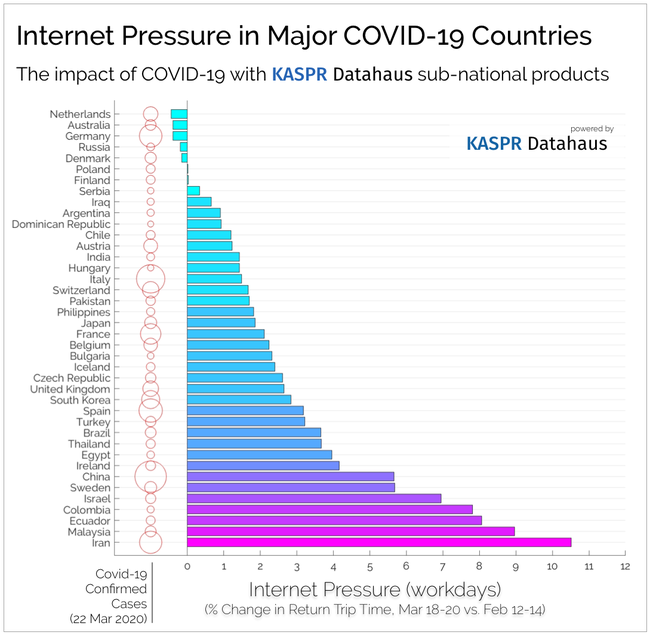 As part of KASPR DataHaus, they have developed technology that collects and processes, on a daily basis, billions of internet activity and quality measurements for any location in the world.

The team has produced a Global Internet Pressure map that is publicly available and is being updated regularly via the KASPR Datahaus website. Users can explore the global observations in a dashboard, and download the data for specific countries.

Associate Professor Paul Raschky explains: “we call this difference measure, between the first days of the lock-down period, and the baseline period in early February, ‘Internet Pressure’, since if it is greater than zero, it exposes latency, or speed, issues, starting to affect millions of internet users across these regions.

“While the values may seem relatively small, such as 3 per cent or 7 per cent, such a difference is far from normal, and indicates that many users are probably experiencing bandwidth congestion. More people at home means more people online – with big bandwidth appetites.

“The situation is not dissimilar to a family trying to make their way through a crowded subway tunnel. Your streaming video or video upload during teleconferencing is made up of thousands of small packets of information; these packets need to find their way down copper and fibre-optic cables across vast distances. The more streaming packets trying to make the journey at once, the more congested the pathway, and the slower the arrival time.”

By focusing on regions within countries having at least 100 confirmed COVID-19 cases as of Friday 13 March, the researchers were able to examine how well each nation’s internet was performing given the rapid escalation in home-based entertainment, video-conferencing, and communication taking place online.

Their findings give a fascinating look into what is now a global reality.

“In most OECD countries affected by COVID-19, the internet quality is still relatively stable. Although regions throughout Italy, Spain and somewhat surprisingly, Sweden, are showing signs of strain,” Dr Raschky said.

“However, it is clear there are some huge issues with the internet in Iran, in which the median (or middle) region in our sample is showing slowing of 25 per cent. In real terms, this will be having major impacts on the user experience.

“Considering the Iranian Government’s history of tampering with the country’s internet by intentionally slowing it, there is a possibility that this increase in internet pressure is the result of the regime’s effort to contain the spread of (mis-)information about the situation around COVID-19.”

At the time of the study, researchers say Malaysia appeared as something of an anomaly. Despite having a relatively small number of confirmed cases on 13 March, the day they accessed the latest figures, the country’s internet pressure readings were far more outsized, sitting above China, Italy, South Korea, Spain and Japan – all countries with confirmed caseloads several times larger.

“Sadly, recent news reports, released a few days after our study was published, seem to confirm the indications we were seeing in our internet pressure measurement,” Dr Raschky said.

“It has now been revealed there was a 16,000-people religious gathering in Malaysia. Following this event, reports emerged that there have been reports of thousands of participants showing flu-like symptoms.

“As a result, it is possible that an unusually large number of Malaysians have probably been staying at home for the past week. We saw this in our observations before the Malaysian Government acknowledged the problem and enacted severe lockdowns.”

And what of Australia? Given the sudden shift to online learning and work-from-home happening across Australia’s major cities, the team has so far found that Australia’s internet is holding up. Just.

Of the states, the ACT, South Australia and Victoria are showing initial signs of pressure, even though schools remain largely open, and many workers continue to go into work.

“The signs for now in Australia are ‘steady’, but not entirely reassuring,” Dr Raschky said.

“We will keep monitoring the situation and plan to provide further reports as the Australian social distancing measures ramp up in the coming days.”