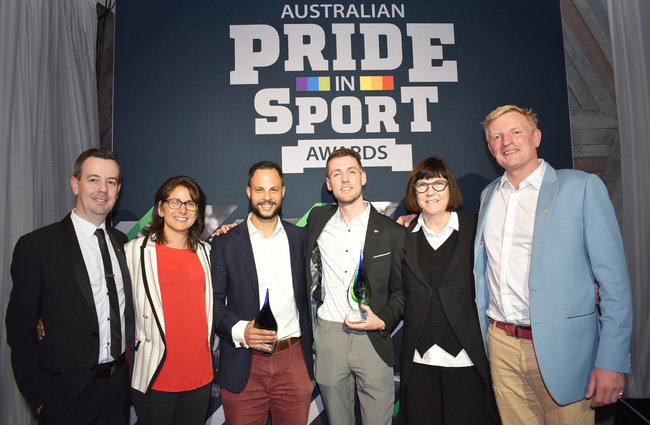 The finalists for the 2020 Australian Pride in Sport Awards have been announced. Now in its third year, the event – to be held on Wednesday 1 April in Melbourne – will see sporting identities, clubs and codes across the country gather to celebrate LGBTQ inclusion throughout Australian sport in 2019. (Finalists can be found at the end of the release)

First held in 2018, the Australian Pride in Sport Awards is the first celebration of its kind dedicated solely to recognising exceptional efforts in making sport more inclusive of LGBTQ people. It is produced by Pride in Sport, the national not-for-profit sporting inclusion program spearheaded by Australia’s largest LGBTQ health organisation ACON.

This year, the Australian Pride in Sport Awards will feature international star Adam Hills as the keynote speaker. A five-time Gold Logie nominee, Hills is one of Australia’s best known comedians, hosting Spicks and Specks and Adam Hills Tonight. Hills has now taken the UK by storm with his own talk show on Channel Four, The Last Leg.

The cocktail evening will feature drinks and canapes at Showtime Events Centre on Melbourne’s South Wharf Promenade. The event will be hosted by Ladies Who League founder Mary Konstantopoulos.

Konstantopoulos is a senior regulatory adviser at nbn, after previously spending five years as a lawyer at Clayton Utz in Sydney. She is the founder of Ladies Who League, a media company that champions women’s involvement in rugby league and has various spinoffs including Ladies Who Legspin and Ladies Who Lineout. As an ambassador for the Full Stop Foundation, Life Education and Women for Change, Mary tops this off with a recent appointment as a Board Member of Hockey Australia.

The Australian Pride in Sport Awards honours athletes, employees and organisations as it showcases the results of the Pride in Sport Index (PSI) – the national benchmarking instrument used to assess LGBTQ inclusion within Australian sport.

“2019 certainly saw LGBTQ inclusion efforts by sporting codes, and the inclusion of LGBTQ players and athletes in general, dominate the headlines – for better or for worse – as well as in the national discourse,” Purchas said.

“The focus on LGBTQ inclusion, zero tolerance of homophobia and transphobia, not only within the corporate sector via their diversity and inclusion practices, but also within sport and society as a whole is unprecedented. Sport has the opportunity to ensure that this focus translates to meaningful societal change and is not just fad. Sport breaks down barriers. Sport aims to create a fair go for all.”

Pride In Sport National Program Manager Beau Newell added: “Many of Australia’s sporting organisations are recognising positive steps need to be taken to ensure your sexuality or gender identity does not impact your ability to play, watch or be involved with sport at any level. The Australian Pride in Sport Awards allows us to celebrate the outstanding achievements of clubs and individuals in improving and promoting LGBTQ inclusion within Australian sport.”

ALLY OF THE YEAR

·         Inclusion of trans and gender diverse people in Australian Cricket

INCLUSIVE COACH OF THE YEAR

OUT ROLE MODEL OF THE YEAR

·         “Until Folau Repents Rugby Australia has no choice to let him go” – Peter FitzSimons, SMH

SMALL CLUB OF THE YEAR

About Pride In Sport

The Pride in Sport Index™ (PSI) is the first and only benchmarking instrument specifically designed to assess the inclusion of people with diverse sexualities and genders across Australian sport. Participating in the index will allow Australian sporting organisations to not only assess their own practice, but determine that which constitutes good practice, along with the ability to benchmark their own initiatives against an external measure and other sporting organisations.

Pride in Sport is an ACON program, one of three within the Pride Inclusion Programs that specifically look at the inclusion of people of diverse genders and sexualities within sport, the workplace and health service provision.