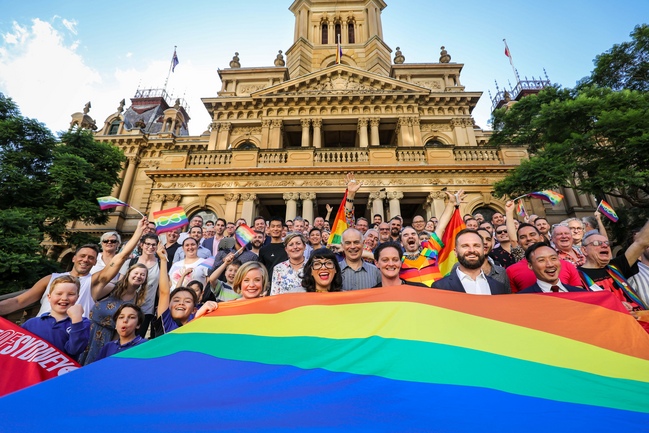 The international symbol for gay pride will fly above Sydney Town Hall throughout the Sydney Mardi Gras celebrations until Sunday 1 March.

Marking the 42nd anniversary of the street march and protest that has evolved into the modern day Mardi Gras festival, this year’s theme is ‘what matters’ – asking LGBTIQ communities and individuals to reflect on what matters to them and what battles still need to be fought.

Deputy Lord Mayor Jess Scully said it was an honour to launch Sydney Mardi Gras on behalf of Lord Mayor Clover Moore and the City of Sydney.

“The theme of Sydney Mardi Gras this year is ‘what matters’ and here at the City of Sydney what matters to us is creating a safe and inclusive city for everyone,” Deputy Lord Mayor Jess Scully said.

“Importantly, we need to consider whose voices need to be amplified as we strive for inclusion, equality and social justice.

“We must never stop looking ahead and imagining a world truly free from discrimination for our future generations, which will be particularly poignant for me this year when I proudly march with my five month old daughter at the Mardi Gras Parade.”

“Every Mardi Gras, we raise the world-recognised rainbow flag at Sydney Town Hall and Taylor Square to send a clear message that Sydney is a welcoming and safe place for all people who live, work or visit our city – regardless of their sexuality, religion, gender or ethnicity,” Lord Mayor Clover Moore said.

“Sydney Mardi Gras is time to party, but also time to remember that this glittering celebration was born out of life-saving political activism from the LGBTIQ community.

“The City of Sydney is proud to stand with the LGBTIQ community as we face new and ongoing battles together; whether that be fighting religious discrimination, fighting for equal rights and for the recognition and wellbeing of transgender people, or fighting to end involuntary surgeries on intersex people.

“I would like to wish you a happy and safe Mardi Gras – see you at Fair Day or the Parade!”

The rainbow flag originated in San Francisco more than 40 years ago and was designed by artist Gilbert Baker. Since then it has become a worldwide emblem of gay pride and gay-friendly areas.

The red in the flag symbolises life, while orange denotes healing, yellow is for sunlight, green represents nature, blue stands for harmony and violet signifies spirit.

The City of Sydney is a major sponsor of 2020 Sydney Mardi Gras and has entered a float in the Mardi Gras parade every year since 2005.

The City is providing approximately $300,000 in cash and in-kind support to the Sydney Gay and Lesbian Mardi Gras organisation for its 2020 festivities.

Around 617,000 people attended the festival last year, with an international media reach of 3.6 billion people, and a contribution of more than $131 million to the NSW economy.

Restrictions: The City of Sydney provides access to this publicly distributed image for editorial purposes only and remains the copyright owner. No archiving, commercial use or third party distribution is permitted without prior written consent. When using content for editorial purposes, you must include the following image credit adjacent to the content: "Photographer’s Name / City of Sydney”