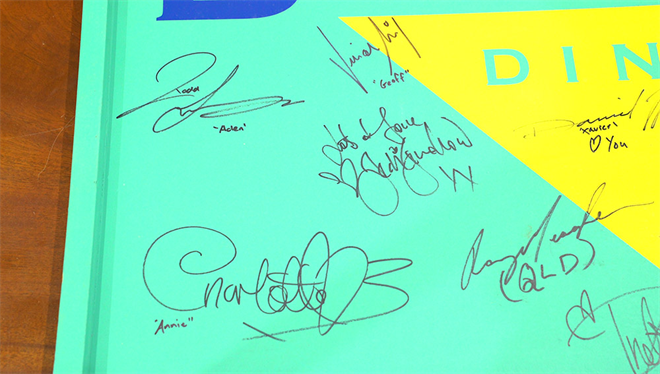 Lincoln donates Home and Away ‘Beachside Diner’ memorabilia sign autographed by the cast including Chris Hemsworth’s signature to the Lloyds Bushfire Relief Auction.

“When the fires happen, I immediately thought how can I contribute and I know that this piece is a part of Home and Away history, this is a part of a show that has been around for so long,” Lincoln said.

“Every time I think about it, I look back and smile about this time of my life and the people I’ve worked with and the people that have done so much for Australian television. As much as I love this, I’m more than happy for it to raise some money for those that need it,” Lincoln continued.

“We are extremely excited to have Lincoln donate this special piece of memorabilia to us and we are sure that many fans of the Home and Away show will also be extremely excited,” said Mr. Hames, Chief Operations Officer for Lloyds Auctions.

“We have to commend Lincoln as we know this piece is very special and close to his heart with many memories attached to it from his time on Home and Away, so to donate this to raise funds to a great cause is incredible,” he continued.

In recent days Lincoln even reached out to former Summer Bay resident Chris Hemsworth to get his autograph to help raise funds for the Bushfires, and he was more than happy to do so.

“I have a lot to do with a few different animal organisations so I would love to donate the proceeds of this item to Wires. Everyone is feeling the impact and with the animals there is so much displacement and I would love to do my bit for them,” said Lincoln.

“Lincoln did say that he was looking for more items to donate to the auction in coming days so keep checking the website for details,” said Mr. Hames.

Bidding for the Bushfire Relief Charity Auction is now live at www.lloydsauctions.com.au or if you are in a position to donate an item or experience that people can bid on to raise vital funds, please call us on 1800 456 588.