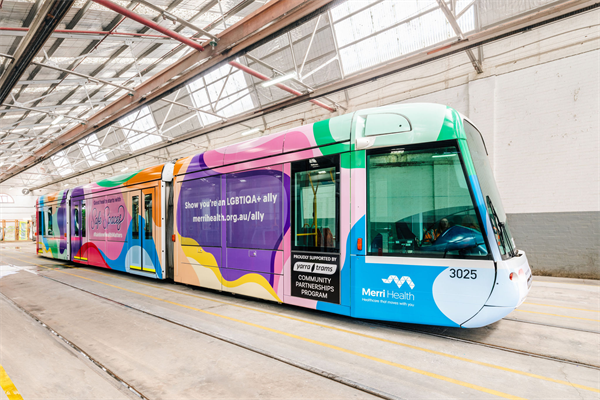 Merri Health has unveiled their first rainbow tram in Melbourne in time for the Midsumma festival.

Inspired by LGBTIQA+ advocate Alison Black, it follows years of discrimination and harassment that left Alison scared to travel alone or access services.

In response to the idea of a rainbow tram in support of the LGBTIQA+ community, Alison said, “I can imagine quite a few people wanting to use public transport again. I would and I’m somebody who was used to hiding all the time.”

Melbournians are being asked to commit their support by displaying a safe spaces poster or sticker at their worksite or committing their personal support as an ally. Information and materials to support safe spaces for LGBTIQA+ people are available at merrihealth.org.au/ally.

Merri Health is a recipient of the 2020 Yarra Trams Community Partnerships Program, which provides $1 million of free advertising value to eight community organisations making a positive impact on diversity and inclusion in Melbourne.

The rainbow tram can be found on routes 48 and 109 until 24 March 2020 and can be seen running along Collins Street in the CBD.