Repairing harmful effects of inbreeding could save the iconic Helmeted Honeyeater, study finds 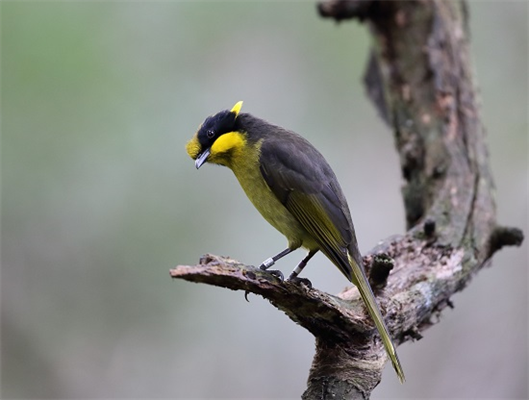 EMBARGOED UNTIL 2 AUGUST, 1AM AEST
Habitat destruction results in wildlife populations that are small, made up of relatives, and have low genetic variation. Breeding between relatives (inbreeding) has harmful effects called ‘inbreeding depression’, often experienced as a shortened life, a poor breeder, or even death.
Not surprisingly then, most animals avoid breeding with their relatives. But when populations become too small, it becomes impossible to find a mate who is not some kind of relation.
Research published today in Current Biology by a collaborative research team led by Monash University reveals just how much damage is done by inbreeding in the critically endangered Helmeted Honeyeater. Professor Paul Sunnucks from Monash University’s School of Biological Sciences, who led the study said the findings have wide-ranging implications for wildlife management.
“Our study combines over 30 years of demanding fieldwork and advanced genetics to quantify how much harm is done by inbreeding in the last wild population of the Helmeted Honeyeater, and identifies ways forward,” Professor Sunnucks said.
The Monash-led study involved collaboration with Zoos Victoria, the Victorian Department of Environment, Land, Water and Planning (DELWP), and other conservation partners, with funding from the Australian Research Council.
The Helmeted Honeyeater, named for its ‘helmet’ of head feathers, is a much-loved State emblem found only in a small region of the State of Victoria.
Since European settlement of Australia, a staggering 99% of the floodplain forest essential for Helmeted Honeyeaters has been converted to agricultural land and towns.
Consequently, only 50 wild Helmeted Honeyeaters remained by 1989. Thanks to conservation actions including captive breeding at Healesville Sanctuary and habitat restoration, there are now about 230 free-living Helmeted Honeyeaters, living precariously in a single location, Yellingbo Nature Conservation Reserve.
The Helmeted Honeyeater would now very likely be extinct if not for those 30 years of conservation actions involving DELWP, Zoos Victoria, Parks Victoria, Melbourne Water, and hundreds of passionate volunteers centred on the Friends of the Helmeted Honeyeater.
“Most Helmeted Honeyeaters over that time have been given coloured leg-bands so that their success in life and love can be followed,” said DELWP Senior Ornithologist Bruce Quin, who led the monitoring.
The result is a detailed account of how long each of the birds lived and how many offspring they had in their lifetimes. Combining this information on breeding success with advanced genetic analysis, the research team could quantify the profound damage caused to Helmeted
Honeyeaters by inbreeding: the most inbred birds produced only one-tenth as many young as the least inbred.
“Clearly, inbreeding depression is likely to impact the population’s chances of survival,” said the paper’s first author Dr Katherine Harrisson, a Monash PhD graduate now at La Trobe University, and the Arthur Rylah Institute (DELWP).
While inbreeding depression is a big problem, it can be reduced by bringing in ‘new blood’ from a closely-related population. Such ‘gene pool mixing’ is an emerging approach to help threatened species.
But the wild population of Helmeted Honeyeater is the last of its kind, so where can new genes come from?
Helmeted Honeyeaters are the most distinctive subspecies of the widespread Yellow-tufted honeyeater. In careful trials of gene pool mixing, Zoos Victoria has cross-bred Helmeted Honeyeaters with members of the most similar other subspecies.
“Mixing the two subspecies in captivity is going very well, with no signs of genetic or other problems,” said Dr Michael Magrath, a Senior Research Manager from Zoos Victoria.
“We have plans to release the first out-crossed birds into the wild population at Yellingbo soon,” he said. Professor Sunnucks said that all being well, gene pool mixing could help overcome the burden of inbreeding depression and bolster an enduring recovery of the Helmeted Honeyeater.
Media enquiries:
Silvia Dropulich Marketing, Media and Communications Manager, Science
T: +61 3 9902 4513 M: +61 435138 743 E: Silvia.Dropulich@monash.edu