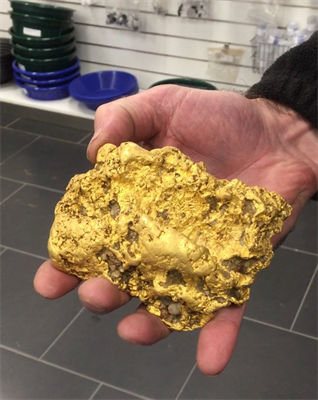 Finding a two-kilogram gold nugget is a good thing. Finding it when the gold price is soaring to record highs is even better.

That’s the situation one anonymous prospector has found himself in after digging up a beautiful 63-ounce specimen on the outskirts of the famous gold rush town of Ballarat in Central Victoria.

“He’s has already received offers of $160,000 for the nugget which he’s named “You Wouldn’t Believe It,” said Mark Day who operates Gold Ballarat.

“I’ve been in this business for 25 years and this is the biggest find we have seen by one of our customers – that they’ve told me about anyway,” he laughed.

The happy prospector, a retiree, has been metal detecting for a while, but hadn’t been able to give it as much time as he would have liked.

“He uses a Minelab GPX4500 and recently came into our store to upgrade his coil to one that was a touch more sensitive,” Mark said.

“It certainly worked for him because he came back with 42 grams of nuggets which made him pretty happy.”

A short while later though, the prospector phoned Mark and asked if he was interested in buying some ‘big gold’.

“I said I wasn’t a buyer and asked him what he meant by big. He said two kilos and I just said ‘You’ve got to be kidding!’.

“When he showed me the nugget here in the store he was shaking like a leaf. He didn’t know what to do with it. He hadn’t slept in three days,” Mark said.

The nugget was found about a metre down in old pastureland - below 30cm of wash and about 15cm of very hard clay. The location was within 150 kms of Ballarat with the prospector keeping the specific site a secret for obvious reasons.

“He told me the detector made a noise and when he dug down a short way and found a .22 lead bullet and thought that was that. But the detector kept insisting there as something there, so he dug further and – bang – there it was,” Mark said.

“History tells us that big finds like this have happened in this area before, and even though they’ve been digging gold in this region for 150 years, it’s still out there.”

With gold passing the AUS$2,000 per ounce mark, the nugget has a gold value of about $130,000 but collectors are offering a premium for the nugget’s rarity.

“People collect nuggets, they don’t want them melted down,” Mark said. “And this one has real character to it. We were in awe when he brought it in. It really looks good.”

Right after his find he went back to Mark’s store and purchased a top of the range Minelab GPZ 7000 and is already enjoying further success.

“He certainly thinks there’s more gold out there,” Mark said. “And after this, who can say he’s wrong?”

About Minelab: Minelab is an Australian-built, multi-award winning business. We are the world leader in providing metal detecting technologies for consumer, humanitarian demining and military needs. Through our dedication to research & development and innovative design, Minelab is the major world manufacturer of handheld metal detector products. Over the past 30 years, Minelab has introduced more innovative and practical technology than any of our competitors and has taken the metal detecting industry to new levels of excellence. Minelab's technology innovations are led by physicist Bruce Candy.  Minelab is a Codan Limited company (ASX: “CDA”).