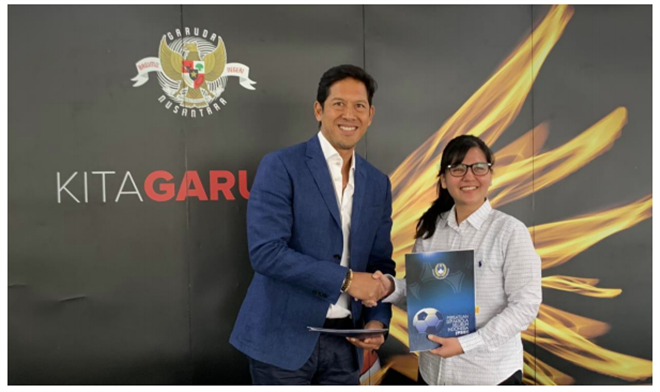 Highlights:
SportsHero Limited (“SportsHero” or the “Company”) (ASX: SHO) is very pleased to announce that the white label mobile application (“Mobile Application” or “Mobile App”) recently developed for the Football Association of Indonesia (“PSSI”), is now live and available for download from Google Play.
On 25 March 2019, the Company entered into an exclusive agreement (“Agreement”) with PSSI, one of the world’s largest sports federations, boasting an engaged fan base of 80 million fans, over 4 leagues and 128 teams. PSSI is 100% owned and controlled by the Indonesian Government and under the Agreement SportsHero is the exclusive provider and partner to build PSSI’s first official platform, including social media, merchandise/e-commerce, game highlights, live streaming, featured video stories and player access.
As announced, on the 18 June 2019, the ‘Kita Garuda’ mobile app went live on the Apple App store and Google Play has now followed. As Android smart phones represent over 88% 1 of the total smart phones in Indonesia, the availability of the ‘Kita Garuda’ mobile app through Google Play is an integral part of SportsHero’s market penetration strategy.
SportsHero’s CEO, Mr Tom Lapping, commented: “In general, Android smart phones are far more common in Asia, particularly in Indonesia where Android smart phone take up and usage has significantly increased as a result of their lower cost profile. We have spent significant time and resources refining the ‘Kita Garuda’ app for PSSI on both iOS and Android. Particular attention has been directed towards the apps functionality on the Android platform, as it is the Android platform that will deliver Kita Garuda’s mass adoption throughout Indonesia.”
For further information, please contact:
Jane Morgan
Investor & Media Relations
+ 61 (0) 405 555 618
jm@janemorganmanagement.com.au