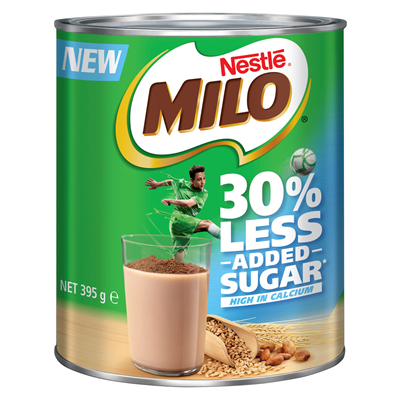 Sydney, 10 April 2019 - Nestlé Australia is set to launch a new version of Milo without cane sugar in response to the changing nutritional needs of families.

This week, the factory where Milo was first created 85 years ago scaled up production of the new addition to the range, Milo 30% Less Added Sugar*, after more than two years in development.

“Milo was originally designed as a nutritious drink for undernourished children during the Depression, delivering added vitamins and minerals in a format children enjoyed.

“With parents increasingly concerned about added sugar in their children’s diets, we’ve created an option that is true to the Milo heritage and encourages people to drink milk, but delivers less added sugar.”

Mr McIver said that like original Milo, new Milo 30% Less Added Sugar contains lactose, which is a naturally occurring sugar in the milk powder, and added sugar in the malt barley – but the cane sugar is gone.

“That means not just keeping the same core ingredients of milk powder, cocoa and malt barley, but also making sure it looks the same, tastes great, and has crunchy bits on top,” he said.

“People will be able to choose whether they want the original Milo, or the new Milo 30% Less Added Sugar, knowing that whatever they choose will taste delicious.”

Milo 30% Less Added Sugar contains malt barley, milk powder and cocoa – like the original – but replaces cane sugar with stevia for sweetness, and soluble corn fibre for texture, to give a new version that looks, tastes and behaves like the 85 year old family favourite.

The new Milo 30% Less Added Sugar is priced at RRP $6.99 and will hit the shelves in early May, alongside the original Milo range.

*Compared to standard Milo when prepared according to directions with skim milk.