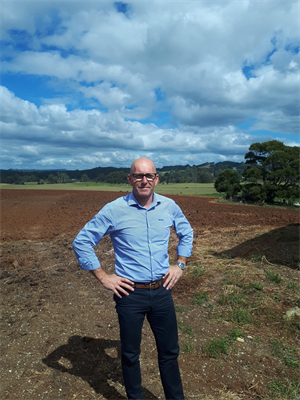 Based in Launceston, but with a remit across much of northern Tasmania, Mr Martin joins the organisation as a senior rural manager.

Announcing the appointment, Rabobank Tasmania branch manager Kathryn Brown said Mr Martin’s experience of working with farming businesses across the state was almost unparalleled, having spent much of his career involved in Tasmanian agriculture.

“We are very lucky to have David join our team,” she said. “David’s tenure in the industry but also his intrinsic knowledge of the Tasmanian agricultural sector is really exceptional, and he will be a strong addition to our team of banking specialists dotted around the state.”

Based in regional centres throughout his career, Mr Martin said he had “been at the coal face of rural business for the better part of 20 years”.

Originally from Victoria’s Western District, where he grew up on his family’s small beef operation near Muntham, Mr Martin made the move to Tasmania in early 2000. Now based here with his family, Mr Martin said he has “well and truly made Tasmania home”.

“I hope the knowledge I have developed over my time here can add value to the family businesses that bank with us,” he said. “To sit down with farmers and understand how their cash is generated, given the variability in energy costs, prices and seasonal conditions, we can add to that conversation our own observations within that commodity or region.”

Mr Martin said this local knowledge was backed up by Rabobank’s research team, which boasts 90 analysts around the world. “Having access to that wealth of up-to-date information across commodity sectors is second to none,” he said.

Mr Martin is very positive about the current state of Tasmania’s agricultural sector, saying it is in “perhaps the best shape it has ever been in”.

Mr Martin takes on the role from long-standing manager David Kay who has recently retired after 12 years with Rabobank.