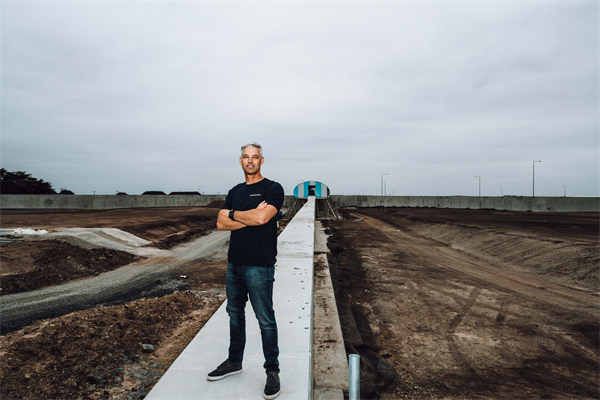 REGISTER TO SURF IT FIRST VIA URBNSURF.COM

·       Construction activities at ‘URBNSURF Melbourne’ are nearing completion, with first waves expected to be breaking in Tullamarine around Easter 2019.

·       Testing and commissioning of the surf lagoon and new wave development will occur during Winter 2019, ahead of a planned opening to the public in Spring 2019.

·       Register your interest to surf URBNSURF Melbourne first via URBNSURF.com.

URBNSURF (urbnsurf.com, @urbnsurf), Australia’s leading surf park developer, today announced that the construction of its ‘URBNSURF Melbourne’ surfing lagoon is nearing completion, and is on track to be pumping out perfect waves at its Melbourne Airport, Tullamarine location around Easter 2019.

Since commencing construction in Autumn 2018, the development of the first commercial surf park in the Southern Hemisphere has rapidly progressed. Major earthworks, civil construction and services installation are now largely complete, and the heart of URBNSURF Melbourne’s surfing lagoon – the world’s first full-scale Wavegarden ‘Cove’ wave generator – has been installed.

URBNSURF is now on the final countdown to filling its Melbourne lagoon, ahead of producing first waves around Easter 2019.

URBNSURF’s Founder and Executive Director, Andrew Ross, said “We’re stoked with the progress that we’ve made on site over the last few months, with our next-generation wave generator successfully installed and the surf lagoon rapidly taking shape. When you walk around the lagoon and witness the scale of the structures, it’s hard to believe this was just a vacant piece of land less than 12 months ago.”

He added, “It’s an incredibly exciting time for us at the moment - we can’t wait to turn on the hose, fill the lagoon, and start pumping out perfect waves around Easter when surfers from around the world are focused on the Australian leg of the surfing World Championship Tour.”

Once first waves have been produced, the wave generator and lagoon will be fine-tuned during a testing and commissioning period conducted over Winter 2019, ahead of URBNSURF Melbourne opening to the public in Spring 2019.

Mr Ross said, “We’ll be developing a range of new waves, trialling custom surfboard designs, and testing other surf equipment during our Winter commissioning period to ensure amazing experiences are delivered to our guests when we open in Spring. Our list of test pilots who want to surf it first is growing fast!”

He added, “We’re incredibly thankful for the support offered by Melbourne surfers, and the Victorian surfing community, as we continue to work tirelessly to provide safe, convenient and accessible opportunities to surf more.”

Registrations of interest to surf it first can be made now via URBNSURF.com

Located adjacent to the Essendon Football Club, and just minutes from Melbourne Airport’s terminals, ‘URBNSURF Melbourne’ is a world-class surf sports, leisure and entertainment venue centred around a next-generation, 2-hectare surfing lagoon that is able to produce up to 1,000 surfing waves per hour.

Within its crystal-clear lagoon, URBNSURF Melbourne will deliver authentic, safe, and convenient surfing experiences, in the form of surf sessions and surf lessons, for up to 84 surfers per hour, day and night, year-round.

Capable of generating knee-high, rolling whitewash waves suitable for new and beginner surfers, right through to 2.0m high steep, barrelling waves that will challenge even the most experienced surfers, URBNSURF Melbourne can accommodate surfers of all ages and ability across six separate surfing zones.

·           High-resolution images of the URBNSURF Melbourne development can be downloaded via the following links.

o    BEHIND THE SCENES IMAGES can be downloaded here

·           High-resolution images and video of professional surfers riding waves similar to those that will be delivered at URBNSURF Melbourne, captured at Wavegarden’s R&D facility in San Sebastian, Spain, can be downloaded via the following links.

Please credit all use to URBNSURF / Ed Sloane or Wavegarden / Pacotwo as the case applies:

o    IMAGES can be downloaded here

o    VIDEOS can be downloaded here

·           URBNSURF Melbourne is expecting to produce its first surfing waves around Easter 2019.

·           The venue’s next-generation surfing lagoon is approximately 2 hectares in area, and is capable of generating up to 1,000 authentic, ocean-like surfing waves (between 0.5m and 2.0m in height) per hour for surfers of all abilities.

·           All forms of surf craft will be welcomed, including shortboards, longboards, bodyboards and kneeboards.

·           URBNSURF Melbourne requires 20ML of water per annum to replenish the lagoon (equivalent to the annual water needs of high-quality turf sports pitches of a similar size).

·           Water will be sourced largely from storm water harvested from the Melbourne Airport precinct, which will be treated to near drinking water standards before entering the surf park’s advanced filtration system.

·           In accordance with its corporate social responsibility strategy, URBNSURF is aiming to source 100% of the venue’s power requirements from renewable energy sources.

·           The development of URBNSURF Melbourne has generated over 300 jobs during the construction phase, and another 45 full time equivalent positions will be created once the venue opens its doors.

·           Accessible by 2 million Melbourne residents in under 30 minutes, URBNSURF Melbourne is expected to inject more than $267 million in gross economic contribution to the Melbourne region over the 30-year life of the project.

·           Surfing options will be flexible, with surfers able to book (either online or in person at the venue) one-off or multiple sessions or lessons, purchase gift cards for family and friends, or join as members for additional benefits and rewards.

·           The costs of sessions, lessons and memberships will vary depending upon the zone surfed in the lagoon and time of use, or tier of membership. Final pricing will be released in mid-2019.

·           The public will be able to watch the surfing action and enjoy quality food and beverages from the venue’s licensed café and restaurant, while a fee will apply for General Admission to the surf park for non-surfing guests.

·           URBNSURF Melbourne will provide a range of aquatic and non-aquatic based activities, services, and amenities for its guests including:

o    Fully-equipped hire centre offering the latest boards, wetsuits and surf hardware for use at the venue;