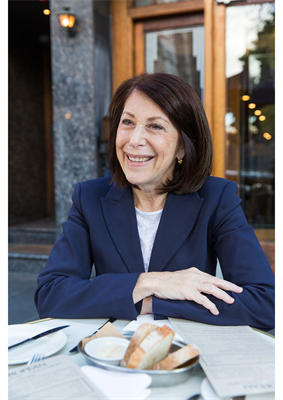 Today Louise Adler AM announced her resignation as the CEO of Melbourne University Publishing after 15 years in the role. In a statement to the media she said,  “I was appointed CEO and Publisher of MUP in 2003 as a consequence of the University having accepted a review led by the doyenne of Australian publishing, Hilary McPhee AO, which was to furnish the blueprint for the vibrant business MUP has become today.

“The historic significance of Melbourne University Publishing was manifest in the prestige of its backlist, however to my concern I was welcomed into the MUP offices with the announcement that ‘MUP is the publisher of last resort; we publish the sweepings off the forest floor’. There was clearly much to do and I set about transforming the editorial culture. Today MUP is Australia's leading university press and its foremost publisher of serious nonfiction.

“This could not have been achieved without the unwavering support of the then Vice-Chancellor, Professor Glyn Davis AC, and his commitment to the principle of editorial independence. The MUP Board has consistently upheld the mandate to publish fine writing from the academy and beyond that contributes to public discourse and documents the national story. Geoffrey Bardon's Papunya, which languished for years in 15 boxes, Rachel Perkins landmark First Australians, Stuart Macintyre's The History Wars, Mark McKenna’s multi-award winning biography of Manning Clark, Jenny Hocking’s forensic biography of Gough Whitlam, Mark Latham's Diaries, Tony Abbott’s Battlelines, Bill Shorten’s For the Common Good, Paul Kelly's The March of Patriots and Triumph and Demise, both magisterial chronicles of contemporary political history, and Louise Milligan’s Cardinal: The Rise and Fall of George Pell that has had national and international impact -these are just some of the MUP titles to have set the agenda, changed community attitudes, altered public policy,  held the powerful to account and defended the disempowered.

“The joy of making ideas into books has been the great privilege of my professional life. It is now time to hand the digital equivalent of the blue pencil over to the next generation as I take on new challenges in public life. My heartfelt thanks to those many writers who trusted us, the courageous and principled current MUP board so ably led in recent times by that eminence grise of Australian publishing - Laurie Muller AM, the creative powerhouse that is the MUP team and a book industry that every day proves that books matter,” said Ms Adler.

On behalf of the MUP Board, Laurie Muller the outgoing Chair and board member since 2009 said today “Louise Adler brought a much-needed vibrancy to a reborn Melbourne University Publishing Ltd when she was appointed CEO and Publisher in 2003.

“During the fifteen years of her stewardship of this venerable publishing house she gave it an editorial energy that engaged with a wide spectrum of authors and broadened readership.

“Whilst MUP maintained its scholarly base it broadened its role by successfully publishing thought provoking and controversial titles that engaged the nation. This came about through the dynamism of Louise Adler and her capacity to identify opportunity and convince distinguished authors to write for MUP.

“Louise has led MUP with distinction over the past fifteen years. She has successfully guided it through the winds of change that buffeted Australian publishing and in successfully discharging her duties will ensure MUP is in good condition to face its future. She has also provided leadership within the Australian publishing industry and also internationally. As a highly regarded public intellectual she has contributed to debate nationally on matters of cultural, political and social importance.

“Louise Adler will leave MUP in robust good health, both financially and editorially. The Board of MUP expresses its sincere gratitude for her diligence, leadership, good judgement and collegiality. It also honours the legacy of the many fine books she has added to the rich tapestry of MUP’s ninety-six-year history and wishes her great success and much satisfaction in the next stage of her professional life.”

Acting CEO, Richard Tegoni said, “on behalf of the MUP team, we acknowledge the leadership, verve and vision that Louise Adler has brought to MUP for the past 15 years. We have a terrific suite of titles by talented authors to be published in 2019, continuing our reputation as Australia’s premier and original university press.”

and the Board of Melbourne University Publishing Ltd