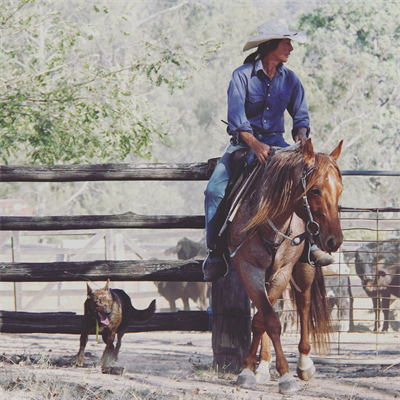 The 12 dogs vying for the title of Australia’s hardest working farm dog have put in a tremendous effort in the first week of the 2018 Cobber Challenge.
NSW dog Jess recorded a strong weekend performance to put her in the overall leader position at the end of week one.
Jess covered an impressive 166.4 kilometres over almost 23 hours in the first week, to record an average speed of 7.24 km/hour during the time she was working.
Jess’s strong performance comes as no surprise to her owner Glenda Rogan.
Glenda and Jess work on the family's beef cattle property, "Cinnabar", in northern NSW. Most of their work involves cattle mustering, educating young cattle, moving stock around the property, checking the welfare of the livestock and checking fences on the about 14,000-acre property.
Glenda says the seven-year-old Jess is very reliable and loyal, with a serious work ethic.
In second place at the end of the first week is South Australian competitor, Mitch. Mitch is a four-year-old Kelpie and his owner Matt Scharkie calls Mitch his “right-hand man”.
Matt and Mitch work on a sheep property in the mid-north of South Australia, where the team shears around 20,000 sheep a year and runs some additional cows.
Other astounding feats in the first week include Tasmanian dog Clyde, entered by Bree-Elle How, recording one of the fastest average speeds on Cobber record for a single day, with a whopping 21.2km/hr average for the time he was working.
Also making news early in the competition, a last-minute substitution by Queensland competitor Christian Bjelke-Petersen. The Kelpie-Collie cross Storm was ready to compete but was withdrawn the weekend before the challenge when she came into heat.
Christian has been planning for some time to breed from Storm but hadn’t banked on the opportunity presenting itself right on the eve of the Cobber Challenge. “I’m heading up north again at the end of the month to do a couple of weeks of mustering. They all have dogs that they work with as well. It might have been okay by then but I couldn’t be sure; I didn’t want to run the risk,” Christian said.
In her place, Christian nominated another member of his A-team to step in, Razor, who was more than up for the challenge.
Since Monday Razor has been among the 12 dogs wearing a GPS collar recording how far, fast and long they have been working each day. The Cobber Challenge will run for three weeks until Sunday 2nd September.
Event organiser and Cobber Brand Manager Marika O’Leary says the Cobber Challenge is a great celebration of working dogs, which are valued team members on many Australian farms.
Cobber Working Dog Food provides the fuel for the dogs competing in the Cobber Challenge as well as thousands of others working hard every day around the country.
Find out more
Check the leader board to keep up to date with the dogs’ performance.
Media enquiries
For more information on this year’s competitors visit www.cobberchallenge.com.au
High resolution photographs of the dogs are available at this dropbox
Or for further questions or interviews with Marika or competitors call:
- Ryan Ong at ryan@curriecommunications.com.au or 0439 575 559 or
- Laura Griffin at laura@curriecommunications.com.au or 03 9670 6599