Mate against mate: Farm dogs from across the nation compete 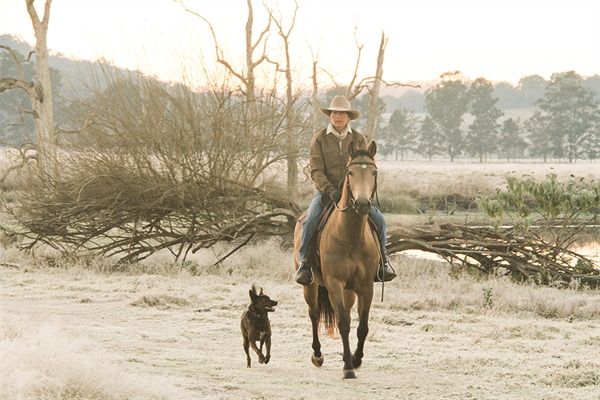 Embargoed 12:01AM, Monday, 23 July 2018
MATE AGAINST MATE: Farm dogs from across the nation compete
IT’S the state of origin for farm working dogs. Twelve competitors from six states have been selected to compete in the 2018 Cobber Challenge.

Each will don GPS trackers with the distance, speed and duration travelled during their working day compared over a period of three weeks in August.

It’s the third year of competition with the southern states dominating to date.

Home of last year’s winner, the 2018 Tasmanian representatives - Bridport’s Molly Cornish and two-year-old Hooch, and Bree-Elle How’s Clyde from Tunbridge - have a lot to live up to. Both will be counting on the need to regularly move large numbers of sheep through a rotational grazing system to rack up the kilometres.

NSW put forward the largest number of nominations, making the selection process tough. This year the state will be represented by Glenda Rogan and her Kelpie Jess, from Copmanhurst, and Boorowa’s Oliver Adlington and Fly, who both appreciate just how hard their dog’s work.

Two competitors from Western Australia are keen to see how the distances in the largest state stack up against their eastern counterparts. Rebecca Martin and her kelpie Tiges from New Norcia, 130 kilometres north of Perth, and Darkan’s Karyn Buller and her Rosie, both work large acreage each day.

The size of the properties will also mean tough competition from the north, with those hailing from Queensland, Moura’s Simon Clarke and his cattle dog Ernie, and contract musterer Christian Bjelke-Petersen and his Kelpie-Collie cross Storm, regularly travelling long distances each day.

Two kelpies from large scale sheep properties in the midst of their busiest time of year will represent South Australia. Matthew Scharkie and Mitch, a four-year-old dog from Terowie in the state’s mid North, and Luke Farrell and Barbie, from Greenways, on the Limestone Coast, will put up stiff competition.

Victoria will also have a Fly in the competition – Fly Harrison and his owner Ben, from Molka in the state’s central north, will join Winchelsea’s Henry Lawrence and six-year-old Boof, in an attempt to bring the title back to its inaugural home of Victoria.

Cobber Brand Manager Marika O'Leary said the number of nominations demonstrates just how keen Australian farmers are to see their dogs recognised for the work they do.

“Each weekend we see our favourite footballers don GPS trackers and it is fascinating to see just how that compares with the working dogs that are such an important part of the farm team.”

“We had nominations from across the country and you could clearly see how everyone values their dogs, the part they play in the farm business, and their mateship,” Marika said.

Cobber Working Dog Food provided the fuel for these dogs, as it does for thousands of working dogs every day around the country.

The competition will run for three weeks from Monday, 13th August to Sunday, 2nd September. The competitors will be scored based on distance, speed and duration of work per day with points accumulated based on daily activity to determine the winner of the Cobber Challenge trophy.

“You can follow the performance of your favourite dog at www.cobberchallenge.com.au, as well as keep track of how your state is doing.”

For more information on this year’s competitors visit www.cobberchallenge.com.au

High resolution photographs of the dogs are available at this dropbox

Or for further questions or interviews call