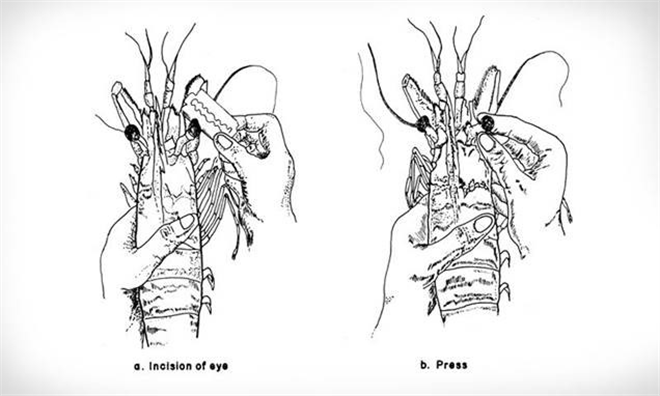 Female prawns in Queensland’s prawn farms are having their eye cut off in a traumatic yet routine procedure designed to make them breed faster.

Animals Australia is calling on the Australian Prawn Farmers Association to end the cruel and unnecessary industry practice of ‘eye-stalk ablation’.

A female prawn has a hormonal gland behind her eye that moderates reproduction, only allowing her to breed when conditions are suitable. The stressful and crowded conditions in hatcheries can make prawns reluctant to reproduce. By cutting off one of her eye stalks, prawn farmers destroy the gland, forcing her into rapid sexual maturity.

“Science indicates the pain and trauma experienced by prawns subjected to this gruesome procedure, yet it is undertaken at most prawn hatcheries around the world and usually without any effective pain relief,” said Animals Australia CEO Glenys Oogjes.

While Queensland law recongises prawns as ‘sentient’ animals deserving of protection, this protection isn’t yet enacted in regulations, which means eye-stalk ablation can continue despite the known trauma it causes.

“Whether they consume prawns or not, the average Australian will be shocked to hear that such a horrific procedure exists, let alone that it is a routine and legal industry practice.”

Eye-stalk ablation was first used in commercial prawn farming in the 1970’s. Research has since found that given the right environment, female prawns will breed without being subjected to this awful procedure. In fact, one of the world’s biggest prawn producers, Seajoy, has successfully phased out eye-stalk ablation.

“With ever-increasing consumer concern about the treatment of animals raised for food, a similar phase out in Australia would be broadly applauded.”

“That cutting an animal’s eyes was ever deemed an acceptable means of increasing profits is another shocking example of an animal industry seeing living, feeling creatures as nothing more than units of production.”

“Whether cutting the tails of piglets, the sensitive beaks of hens, or the eyes of prawns, we are once again seeing the awful consequences of factory farming in Australia and the lack of legal protection for farmed animals.”

Animals Australia has written to the Australian Prawn Farmers Association and major prawn farming companies seeking their co-operation to end the practice of eye-stalk ablation. The matter has also been brought to the attention of Australian retailers and the Queensland government.

FOOTAGE: https://vimeo.com/230860778 [not taken in Australia but representative of procedure]