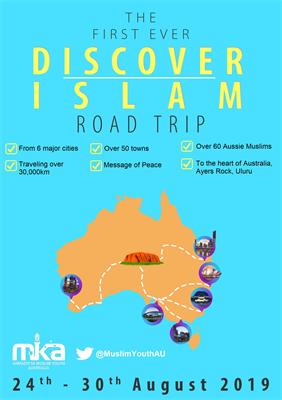 Media Opportunities:
Live interviews with Australian Imams, Aussie Muslim Youth, Presidents of the AMYA, volunteers, Muslim scholars and others.
As part of a nationwide campaign titled the “Discover Islam Road Trip”, over 60 Muslim youth from the Ahmadiyya Muslim Youth Association (AMYA) will travel from far and wide across the nation to the heart of Australia, Ayers Rock, Uluru from 24th to 30th August. Along the way, they will stop at around 50 regional and remote towns with the aim to build stronger relationships in an effort to promote social cohesion and remove misconceptions.
Research has shown that about 70 per cent of Australians know ‘little to nothing’ about Muslims or what they stand for. About half of Australians still have negative sentiments towards Muslims and more than half are uncomfortable speaking with a Muslim.  The ‘Discover Islam Road Trip’ will provide Australian’s living in regional and remote areas the opportunity to have a free coffee and make friends with Aussie Muslims.
The National President of AMYA of Australia, Waqas Ahmad states:
“What better way to explore the Aussie outback and get to know other fellow Aussies? Our youth are committed to eradicating the fear that is often felt by non-Muslims in Australia, by devoting their time and effort to travel from all across Australia to the heart of our nation and provide opportunity for conversation. Studies tell us that having more factual knowledge about Muslims leads to less prejudice so this is the perfect way to engage with people and play our part in positively shifting any negative views that people may have.”
Out of respect, the Muslim youth will not climb Ayers Rock. Instead they will spend their time cleaning the area as well as praying for peace and prosperity for all Australians at this sacred site.
For further information about the route or to arrange a time to meet during the Discover Islam Road Trip, please visit their Twitter account @MuslimYouthAU.
_____________________________________
Media Contact:
Aqeel Ibraheem - 0433 449 762
Muneeb Janud - 0433 072 470
Twitter: @MuslimYouthAU
_____________________________________
About the Ahmadiyya Muslim Youth Association:
The Ahmadiyya Muslim Youth Association (AMYA) of Australia is a unique, dynamic and vibrant organisation serving not only the needs of its own members but also the general Australian society at large. The AMYA is a nationwide youth group that engages with young Muslim men and boys around the country serving as the young men and boy’s auxiliary of the Ahmadiyya Muslim Community. In Australia, the organisation was officially established in 1983 and now has 24 local branches in all major cities of Australia, with a membership of over 1,000. The Ahmadiyya Muslim Youth of Australia have been at the forefront of serving some of Australia’s largest charities including Clean Up Australia Day, National Tree Day, and Red Cross Blood Drives. Among their other work, the AMYA plays prominent roles in promoting peace and prosperity by conducting Youth Peace Symposiums, educational and training camps as well as participating in regular community events and humanitarian services for the nation.
For more information please visit their official website: Khuddam.org.au
Twitter: @MuslimYouthAU | Email: Media@Ahmadiyya.org.au