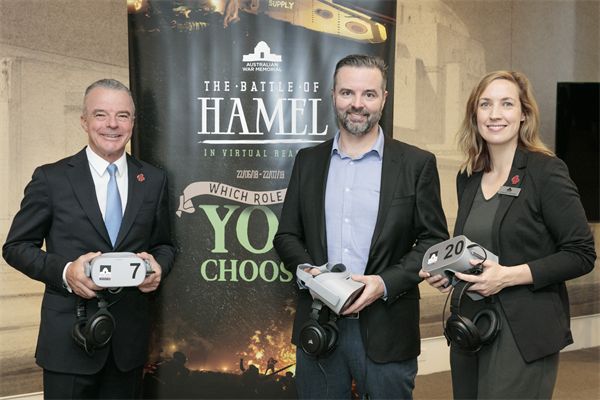 The Australian War Memorial has launched the Battle of Hamel virtual reality experience which uses the latest in VR technology to deliver a synchronised in-theatre experience for the first time worldwide.

During the ten-minute interactive, audiences of up to 45 people will wear VR headsets and headphones that will give them an up-close view of the battlefield at Le Hamel. It is the first time in the world that the newly-released Oculus Go VR headset has been used to create a synchronised interactive VR experience on this scale.

From 22 June to 22 July, the French countryside of the First World War will be brought to virtual life in the Memorial’s theatre. Audiences will be immersed in the story of this key action fought on 4 July 1918 on the Western Front.

Audiences will hear how Lieutenant General Sir John Monash meticulously planned the battle, before they choose to continue from the perspective of an airman, infantryman, or tank crewman. Aircraft, tanks and the battlefield will be presented in a combination of 3D and 360-degree video.

Memorial Director Dr Brendan Nelson said it was important to showcase new technologies as avenues to tell the stories of the likes of Sir John Monash, considered one of history’s greatest Australians.

“On 4 July 1918 the Australian Corps, led by General Sir John Monash, was victorious at the battle of Hamel. Leading Australian soldiers alongside Americans for the first time in history, Monash meticulously planned out the battle to last 90 minutes – it took 93.

“This immersive technology gives people today a unique insight into the events at Hamel almost 100 years ago. I encourage everyone with an interest to book your free ticket the Hamel VR Experience and learn a bit more about what men like Monash did for us.

“Importantly the Hamel VR experience uses the Memorial’s own artefacts to present the story of the battle and its human dimensions, avoiding any semblance of entertainment,” Dr Nelson said.

“By merging the Memorial’s archival material with a VR rendering of the battle, people can see, hear, and feel history in a way never before encountered.

“To create a world first, leveraging VR technology that’s barely a few months old is in itself fantastic, but to know that this experience will unlock a key moment in Australia’s history that many people are unaware of, makes it all the more exciting,” Mr Stevens said.

To book tickets for Battle of Hamel virtual reality experience, which was developed with the support of Boeing Australia, go to the Memorial’s website.

The Australian War Memorial’s Battle of Hamel virtual reality experience is the first time that the newly launched Oculus Go VR unit has been used to simultaneously launch 45 devices with a simultaneous, interactive VR experience.

Presented in a movie-style session, the audience will commence the synced experience with the Oculus Go VR units launching the content at the same time. However, not everyone will see the same content as users will be given the choice to view the battle from the perspective of an airman, a tank crewman, or as a member of the infantry.

So innovative was the approach, that the content was being built for the Oculus Go months prior to Oculus Go VR hardware being available to the public. To deliver this world-first virtual reality event Start VR built the content through combining several programs.

Tilt Brush, a VR specialist program, was inspired by artwork of the time and was used to create artistic impressions on the battle front. Archival photos and historical artefacts from the Memorial’s collection were merged with the technical specifications of the weaponry and maps of the terrain to ensure the content was accurate to scale.

Within these scenes all the lighting effects, animations, and explosions that occur within the battlefront sequences combined Tilt Brush with Unity 3D.

In addition to these programs, Start VR also used numerous other video and graphic programs to deliver the interactive VR experience.

To create the wire-framing of the overall piece, to visualise it and proto-type the content in a 360° VR environment, SketchBox was used along with traditional 2D programs such as Photoshop, Illustrator and the good old pen and paper.

To enter through the museum’s painting and bring it to life – a combination of 360° stereoscopic stills were captured and combined with 3D VFX program – Houdini.

The sequence which immediately follows this introduction and depicts archival footage over an animated 3D Globe, was built through a combination animation programs including Fusion, Premiere, Unity3D, Photoshop and After Effects.

This software was also used for visualising and animating Monash’s Battle Plan.

Tilt Brush formed the basis for the three different perspectives of the battle itself, with the lighting effects, animations, explosions and interactive functionality being created in Unity 3D.

Through this innovative approach The Battle of Hamel VR Experience gives the audience a world first experience on the newly launched Oculus Go VR unit.

AWM2018.4.130.36: Guests at the launch of the Battle of Hamel virtual reality experience try out the technology.

Please find a promotional video which can be used for reporting purposes. If you require additional images email media@awm.gov.au.