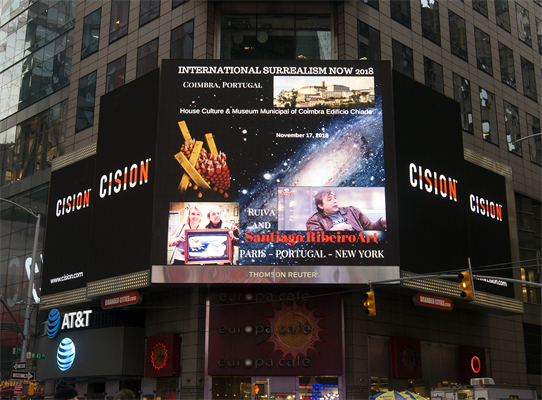 On the way of the multimedia exhibition of Santiago Ribeiro in Times Square, New York, was announced the past exhibition "Osmosis-Kiraméki Transfigured!" in the center of Paris and will be promoted the exhibition Surrèalisme Now in Coimbra in Portugal.

The art of the Portuguese surrealist painter Santiago Ribeiro will be displayed openly at the Thomson Reuters and Nasdaq OMX Group at Times Square in New York City all year of 2018 and started in July 19 of 2017.

"As usual, every time, I do something different and innovative and the idea of ​​exhibiting in Times Square, New York, shows how media and new technologies are a modern way to divulge our art," he said. declared Ribeiro.

His work will be shown daily, randomly, alternately, for several minutes in each session, until December 31, 2017.

His paintings have been described as "complex compositions illustrating profound concerns about modern society and its individual and collective behavior."

He has organized and participated in numerous individual and collective art exhibitions in Portugal and abroad.

Ribeiro’s work has been featured at the U.S. Embassy in Lisbon, in the  Portuguese American Journal, in Digital Meets Culture, Pressenza fr, metroNews.ru , Pravda in Portuguese, Huffingtonpost, The Herald News, Associated Press and many other publications (link).

Its sponsors include the Bissaya Barreto Foundation, Câmara de Coimbra and the North American MagicCraftsman studio.

His work is represented in several private collections as well as in the contemporary art collection of the Machado de Castro National Museum and in the Bissaya Barreto Foundation in Coimbra, Portugal.

November 17, 2018
in the Chiado Museum and Coimbra House of Culture in Portugal.

The world's largest surrealist art exhibition of the 21st century with 107 surrealist artists from 45 countries on five continents.