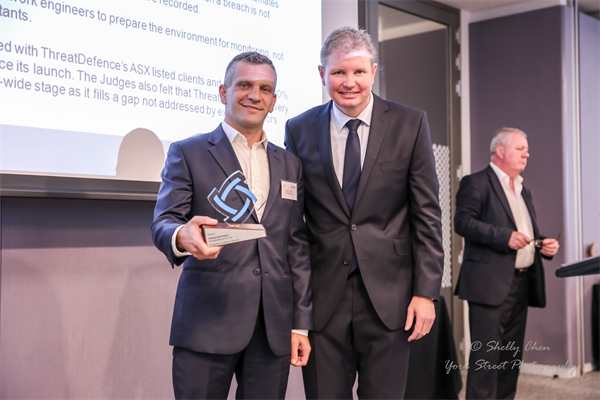 The awards, famous for predicting global Aussie technology success stories, were presented at One International Tower, Sydney, on 18 December 2017.

In announcing the winner, Consensus founder and CEO Julian Day said the judges were “very, very impressed” with what ThreatDefence has achieved.

“It is an IT security monitoring system that resolves many issues with the current market offerings,” Mr Day said.

“It automates threat detection and provides 100 percent network accountability. It just takes 1 hour for network engineers to prepare the environment for monitoring.

Speaking after the ceremony, ThreatDefence CEO Zlatko Hristov says the award is an affirmation of all the hard work his team has done.

“It is so great to receive this award. It’s an amazing recognition of what we’ve built,” Mr Hristov said.

“We saw a new and better way to monitor cyber security. We chased that goal and now it’s become a reality.”

The judge’s citation for ThreatDefence’s unique offering reads: “It is able to monitor anything, provides rapid deployment and has many unique features that the current market offerings lack.

“The Judges also felt that ThreatDefence has a very high potential on the world-wide stage as it fills a gap not addressed by existing vendors.”

In a statement before the ceremony, Australian Prime Minister Malcolm Turnbull, who presented the Consensus Awards in 2011 and 2012, noted that a win here can be the marker of much bigger things to come.

“The Consensus Awards have a great track record of celebrating some of the most cutting-edge and innovative Australian tech companies, counting world-famous firms Atlassian and WiseTech Global as former recipients,” Mr Turnbull said.

“I have no doubt that this year’s recipients will follow in their success.”

Mr Hristov says ThreatDefence’s ambition is to do just that.

Founded in 2016, Sydney-based ThreatDefence offers organisations of any size a similar cyber security monitoring approach as used by the world’s largest corporations.

This capability is delivered via a plug&play device that can be set up in few minutes.

ThreatDefence makes it simple and affordable for organisations to monitor cyber security or any other data and then combat the weaknesses that plague enterprises, including:

Through simple-to-use, real-time dashboards users gain unprecedented visibility into their networks and systems within minutes.

ThreatDefence’s solution will expose weak areas and uplift monitoring capabilities to bank-grade quality in minutes. To date, no other tool or solution can do this.

About the Consensus Software Awards

Consensus is an organisation committed to supporting Australian and New Zealand innovation and enterprise and provides development pathways and tools for growth.

Since the first awards in 1999, 89 percent of Consensus winners have gone on to be highly successful globally. Most notable is Atlassian, which won in 2004 and now has a market cap of more than US$10 billion.