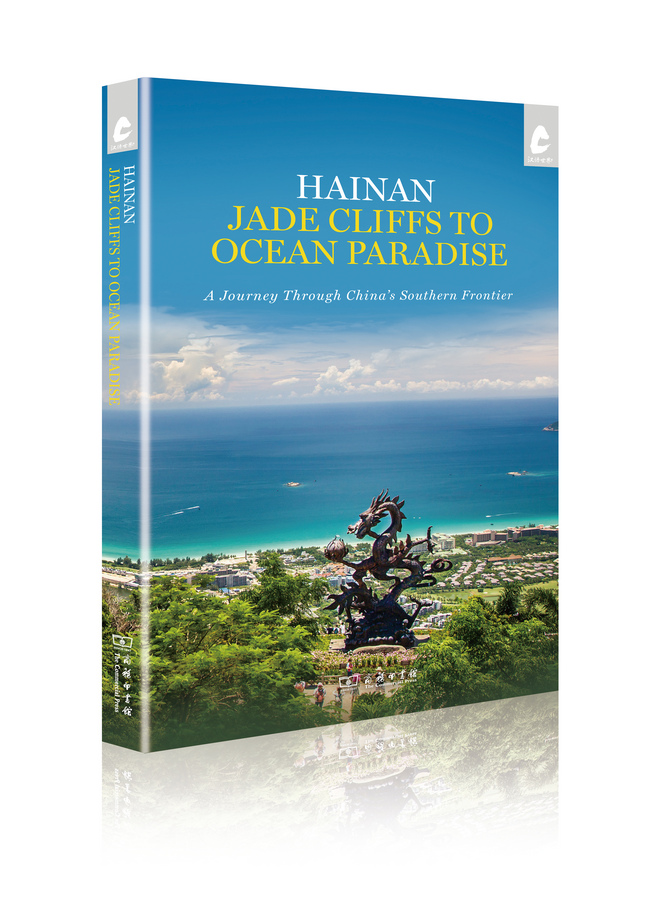 On September 9, to help overseas readers learn more about Hainan, the Beijing branch of the Commercial Press launched the book entitled "Stories between the Sea and Sky - Hainan: Jade Cliffs to Ocean Paradise". It is a book in English jointly published by the Hainan Provincial Department of Tourism, Culture, Media and Sports and the Commercial Press. Written by eight senior media professionals from 5 countries, the book introduces geologic wonders, history, ecology, and social and economic life of Hainan Island. It is a great book for overseas readers who want to learn more about Hainan.

At the book launch, Zhao Haiyun, Deputy Director of the Import and Export Bureau of the Publicity Department of the Chinese Communist Party, Sun Ying, Director of the Hainan Provincial Department of Tourism, Culture, Media and Sports, Li Yan, Director and General Manager of China Publishing and Media Co., Ltd., and Gu Qing, Secretary of the Party Committee and Executive Director of the Commercial Press jointly unveiled the new book, announced the official launch of Hainan: Jade Cliffs to Ocean Paradise and recommended the book to readers around the globe.

A Window to the Hainan Free Trade Port

In her speech, Sun Ying thanked the authors and the editorial team of Hainan: Jade Cliffs to Ocean Paradise for their hard work, making the book best interpret cultural and tourism integration in Hainan. She introduced Hainan's colorful cultural tourism resources, stories relating to the free trade port construction, and the significance of the island to the ancient Maritime Silk Road. Sun Ying said that she hopes the book would become a window to the island, convey the voice of the people on the island, and help more foreign friends learn about Hainan and China.

Gu Qing said in his speech that after reading the book, many people would find out that Hainan is also a paradise with unlimited potential and a lot to offer to tourists from around the world.

Zhao Haiyun expressed full support for the cooperation between competent Chinese publishing companies and local cultural and tourism organizations in the promotion of the island's culture. Telling the Hainan story in a certain sense is telling stories of China's economic reform, state governance, and Chinese people pursuing their dreams.

It is learned that in the English title of the book Hainan: Jade Cliffs to Ocean Paradise, "Jade Cliffs" is inspired by the ancient name of Hainan "qiong ya" while the expression "Ocean Paradise" conveys the message that Hainan is a perfect tropical getaway. As part of The World of Chinese Magazine's Contemporary China Series, the book is another masterpiece that introduces the culture of Hainan and tells the Chinese story to overseas readers.

At the book launch, Chu Dandan, vice president of The World of Chinese introduced the highlights of the book, and shared a video shot with drones about the adventure of the team in Hainan. One of the writers of the book, Hatty Liu from Canada, read her chapter about laoba cha, or "Daddy Tea".

Unlike other travel guides that only write about places to go for fun or food, this book focuses on what overseas tourists are most interested in, tells the story of Hainan from seven angles, and answers the question why you should visit Hainan. Chapter 1 "Nature" introduces the volcano, rainforest, rivers, and protected animals on the island; Chapter 2 "Island Paradise" introduces the beautiful seashore and a host of sports and activities around the island; Chapter 3 "History" tells stories about local literati, the Maritime Silk Road, foreign exchanges, capturing the history and reality of Hainan; Chapter 4 "Culture" introduces Li and Miao ethnic groups, fishermen's traditions and culture, Nanshan blessing ceremony, and other cultural aspects of the island, inviting tourists to embark on a journey which will offer them an opportunity to reflect on themselves and broaden their horizons; Chapter 5 "Food and Drink" offers a guide on cuisine, must-eat delicacies, party drinks, and fruit in Hainan; Chapter 6 "Resort" introduces Hainan's high-end hotels, festivals, and outdoor sports; Chapter 7 "Hainan Today" introduces the construction of the free trade port, health tourism, and the future of technology and depicts the new landscape of all-round opening-up in Hainan.

The appendix of the book includes a list of Level-A scenic spots in Hainan, which lists the names and addresses of scenic spots on the island by administrative division. Inside the dust jacket of the book is a hand-drawn sightseeing map of the whole island, showing the top attractions described in the book. Tourists can take it down and read it carefully to find attractions they are interested in.

The World of Chinese Magazine's Contemporary China Series, including Hainan: Jade Cliffs to Ocean Paradise was published simultaneously in both digital and printed forms, and distributed globally in more than 60 countries. Over 400 libraries, 500 Confucius Institutes and Confucius Classrooms, and many international mainstream reading platforms and library databases have included this series in their collections.

Source: The Department of Tourism, Culture, Radio, Television and Sports of Hainan Province