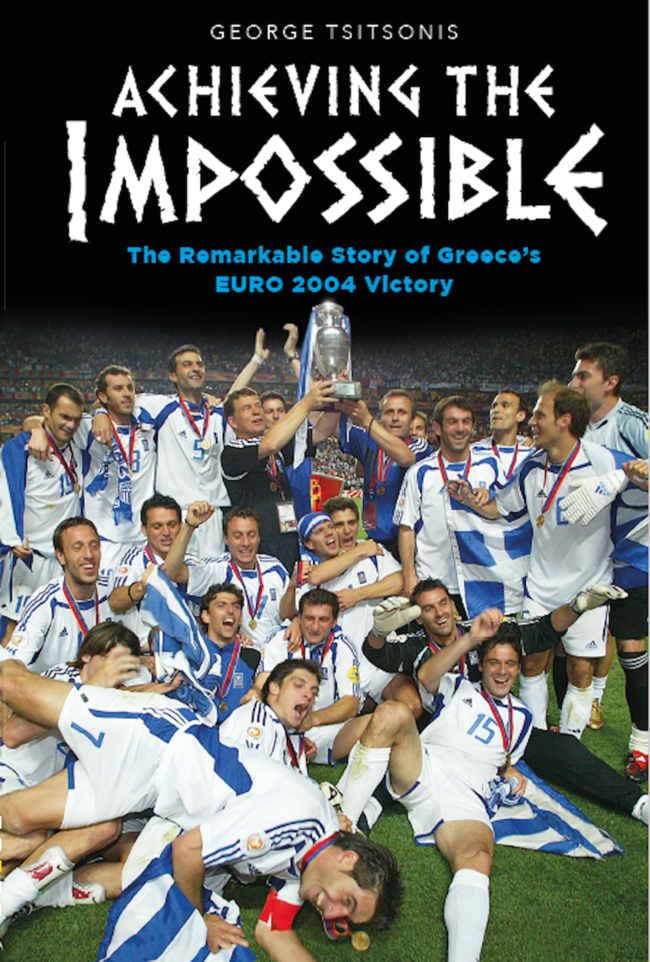 Achieving the Impossible a reminder of a sporting fairy tale

16 years to the day when the 2004 European Football Championship kicked-off – and on the same day that EURO 2020 was originally scheduled to do the same – a new book is to be released on the 2004 tournament on Friday June 12th.

Achieving the Impossible by American writer, George Tsitsonis, covers the magical run of the Greek National Team, known as the Ethniki, that went on to win EURO 2004.

It is the first book written about the team’s story in the English language.

At the turn of the millennium the Ethniki was at its lowest ebb. Team unity was non-existent; the team had just missed out on qualifying for another major tournament; and the future looked extremely bleak.

In August 2001, German manager Otto Rehhagel was appointed as the team’s coach, a man known for being a strict disciplinarian, an astute tactician, and with an uncanny ability to fix broken teams.

In an inauspicious start, Greece lost their first match under Rehhagel, 5-1 against Finland.

However, what followed in the next two years was an unlikely qualification to EURO 2004 and eventually an even more unlikely, and remarkable, victory of the team during that tournament held in Portugal.

Facing the host team in the opening game, littered with stars including Luis Figo and Cristiano Ronaldo, Greece was rated the 250-1 underdogs. They not only stunned Portugal then, but also had victories against France and the Czech Republic in the knockout stages before once again surprising Portugal in the Final.

It was one of  football’s most remarkable fairy tale victories, bringing immense pride and joy to followers of the Ethnikiin Greece and amongst the worldwide Greek diaspora.

Author George Tsitsonis has compiled first-hand accounts from players, coaches and officials from the Ethniki, and chronicled the development of the team from when they were known as chronic ‘under performers’ at the time Rehhagel took over to be crowned champions of Europe.

The media release is available in Greek for Greek language media (attached).

George Tsitsonis is a Greek-American football writer who has been an amateur player, coach and writer.

The son of Greek immigrants, George was exposed to the game as a young boy through kickabouts with his father. That, coupled with growing up alongside football-mad friends and reading magazines such as Soccer America and World Soccer, fuelled an intense passion for the sport.

After graduating, George became a freelance writer in 2002, and has had his work published in a variety of outlets including FourFourTwo, ESPN Soccernet, FIFA World, FIFA Magazine, Soccer International, Inside Soccer Magazine, 90 Minutes Magazine, Football Club Magazine, Greeksoccer.com, Goal.com and SoccerAge He has been a Senior Staff Writer for AGONASport.com, the world’s biggest English-language website devoted to Greek sport, since 2016.

George resides in Walpole, New Hampshire, USA with his wife and two children.