New PSA fellows recognised for outstanding service to the profession 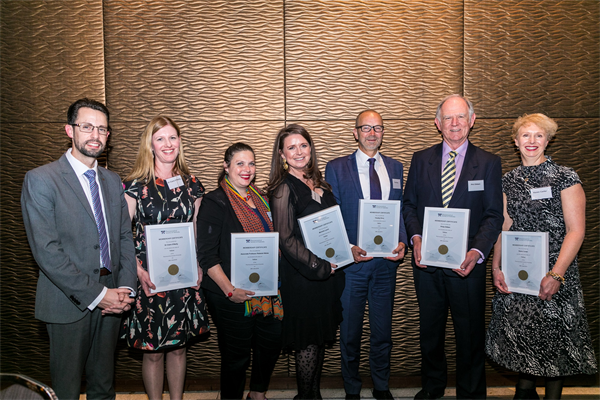 The Pharmaceutical Society of Australia (PSA) last night announced seven new Fellows in recognition of their outstanding contribution to PSA and the pharmacy profession.

• Mr Tim Perry, NSW
Mr Perry has owned and managed community pharmacies in Sydney for 25 years. In recent times, he has worked as a non-dispensing Clinical Pharmacist in various medical practices. He also established his own Medicines Review Company, playing a key role in medicine safety through the provision of HMRs and RMMRs in collaboration with community pharmacies, GPs and other healthcare teams.

• A/Prof Rebekah Moles, NSW
A/Prof Moles is a pharmacist with experience in community and hospital pharmacy as well as research into the Quality Use of Medicines both in pediatric dosing and in transitions of care – post hospital discharge. She has dedicated much of her time to both the education and professional development of pharmacists across Australia. She is also a volunteer on PSA's NSW Branch Committee where she supports PSA's advocacy messages through meetings with state and federal politicians.

• Mr Phil Dibben, NSW
Mr Dibben has been a community pharmacy owner for over 40 years in the Newcastle area. In the 1990s, he was influential in bringing Breath-a-Tech, a revolutionary asthma treatment device, to the market. He was also instrumental in the establishment of the Master of Pharmacy Program at the University of Newcastle where he is a member of the pharmacy advisory group.

• Mrs Karen Carter, NSW
Mrs Carter is a community pharmacy owner in Gunnedah and Narrabri. She has worked in both hospital and community pharmacy across the span of her pharmacy career and is also an accredited pharmacist – providing HMRs and RMMRs. Recognising the severe impacts of the drought in her region, Mrs Carter was proactive in liaising with PSA to establish a course to ensure pharmacists were equipped to best support the mental health challenges faced by the community.

• Dr Claire O'Reilly, NSW
Dr Claire O’Reilly is a Senior Lecturer at the University of Sydney Pharmacy School. She was previously National Vice President of PSA (2011-2014) and was the first pharmacist to be appointed to the Medical Services Advisory Committee, which provides advice to the Federal Government on the strength of evidence for the safety, effectiveness and cost-effectiveness of medical technologies.

• Mr Bill Suen, VIC
Mr Suen contributed to a number of pharmacy practice changes during his tenure as PSA Victoria State Manager. He worked with the Victorian Branch Committee to establish the Victorian Family Tree mentoring program to support young pharmacists and PSA members develop their careers. This has now evolved into a national mentoring program. He also advocated for developments in pharmacy practice including: pharmacist-administered vaccinations; real-time prescription monitoring; and pharmacotherapy training and enhanced roles for pharmacists.

• Ms Michelle Lynch, VIC
Ms Lynch is the National Hospital Pharmacy Manager at Ramsay Health Care and current PSA National Vice President. She has previously served as PSA Victoria Branch Committee Vice President and President. One of her most significant contributions to the profession was in the Parliamentary Inquiry into the roles and opportunities for community pharmacy in primary and preventative care in Victoria in 2014. Speaking at the inquiry, she advocated for expanding the role of pharmacists to improve health outcomes and reduce medicine-related harm.

PSA National President Dr Chris Freeman congratulated the new Fellows and acknowledged the significant impact they have had throughout their careers.

"Each of the people recognised this evening have made, and continue to make, outstanding contributions to the pharmacy profession," he said.

"On behalf of PSA, I thank them for their ongoing service and dedication to improving pharmacy practice and patient care."