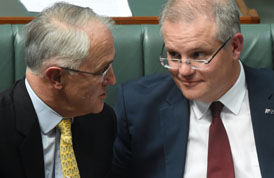 Putting aside this year’s record weather temperatures, the political mercury will be rising steeply for the next few months: firstly with the 2016 Budget due to be tabled in Canberra on Tuesday 3 May, and the looming Federal election expected to follow within sixty days on 2 July.

The climate around any Budget is always one of uncertainty until the formal delivery by the Treasurer and until the devil in the detail is known.

After two years of budgets under former Treasurer Joe Hockey that were tough-going for many, the honour of setting the government’s economic direction this year goes to Scott Morrison.

Election year budgets have a reputation of being prone to an incumbent government’s desire to stay on the Treasury benches, and for the dispensing of budgetary measures that will favourably navigate them to that end.

For his part Mr Morrison has – at events like a Business Council of Australia dinner earlier this month – taken pains to signal that next week’s budget would again show the Coalition’s commitment to steering Australia to “live within our means”.

Whichever way the politics play, we all have a stake in how public spending (our taxes) are allocated, and as always there will be a close eye kept on reportage of the Winners and Losers.

By this stage of this annual cycle your organisation may have made pre-budget submissions and will be focused on waiting for the details and bigger picture context.

Come Budget day on Tuesday 3 May and the remainder of next week, getting clarity on the impacts of the budget will be an important imperative across the spectrum from public sector to commercial companies and not-for-profits.

Whether working for an organisation that might be anticipating a boost of new funding, or one simply hoping for the stability of the status quo, budget time always serves as an opportunity to weigh up government priorities to clearly set your planning against, and to choose what you wish to voice support for, or otherwise.
_________________________