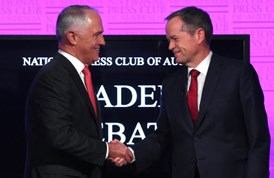 The word from newsrooms on the 2016 Federal Election campaigning to date is well and truly out!

Election campaigning isn’t meant to be a mere spectator sport, where everyone sits back and passively watches Australia’s political leaders and their parties run their playbooks as best they can until one emerges as the take-all winner for the following three years.

Without being too idealistic, election periods are a rare window of opportunity to enter into a contest of ideas, translatable into policy positions, in such a way that messages that might be drowned out or not fully expressed during times of ‘business as usual’ are framed into positive advocacy.

The target audience may just be the politicians themselves – with releases that signal support for a preferred policy position, or take a stand against a policy, or propose alternatives.

These will be read by the campaigning party machines, and for many member-oriented organisations there is no better time to put your best foot forward and be seen to be aligned to the interests of your members and fighting to gain traction.

What serves everyone least is for public debates to be running at the low ebb currently being seen.

So what can you do to help wake up the nation during the run-up to polling day?

Here are four points to consider:

Looking for examples?
Here’s a healthy helping from the health sector: